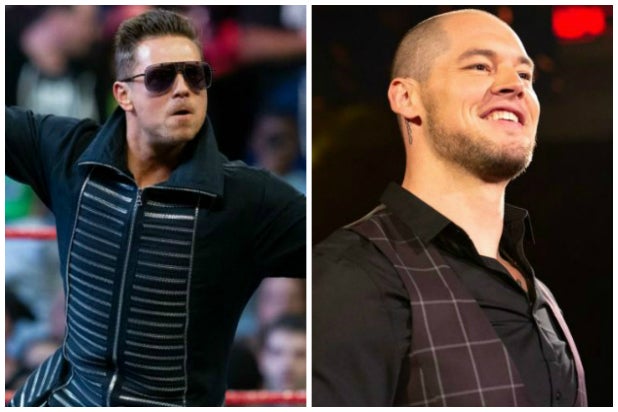 Baron Corbin is far from a fan-favorite wrestler, but fellow WWE “Raw” Superstar Mike “The Miz” Mizanin reminded TheWrap that could all turn around — just look at his own career.

“It took 13 years for people to realize my talent, I think. If you really think about it– a lot of people say Baron Corbin is that heel that you just can’t stand, you don’t want to watch, blah, blah, blah,” Miz said in an interview leading up to a (particularly) busy week for him and his wife Maryse. “I was that guy for a long time. It took a long, long time.”

To be clear, it was Mike, the former “Real World” cast member, who brought up Corbin. We asked Miz about his current positioning as a good guy — a.k.a. a “babyface,” in wrestling parlance — on WWE TV. He had played a heel — a bad guy — for a long time, and did it masterfully.

Also Read: WWE's The Miz Wants You to Consider His New Reality Show in the Vein of 'Curb' or 'The Office'

“It’s not like WWE changed me to a babyface — it was the audience,” Miz continued. “And honestly I think it was ‘Miz & Mrs.’ Seeing me on a show, and actually see that I’m not– I hope people see that I’m not as arrogant and cocky and egotistical as I am on TV.”

“And yeah, I do a great job as a bad guy, as a villain, but I’m enjoying this new challenge of being a good guy,” he said. “And guess what? It takes time to develop, even though I am a seasoned vet, even though I’ve been there for so many years. This is a whole different dynamic that I have to get used to, that I have to find.”

Within the confines of WWE’s ring, Miz has been finding the new dynamic mostly through a feud with Shane McMahon, the son of Vince McMahon who has settled nicely into his famous father’s famously villainous role.

Miz and Shane O’Mac had a huge grudge match earlier this year at WrestleMania, one that ended with a particularly huge spot — for Mike at least. Miz suplexed Shane off of some pretty high scaffolding at New Jersey’s MetLife Center. The maneuver was par for the course for the daredevil of the McMahon family, but it was surprisingly dangerous for Miz, who many fans had previously knocked for wrestling a “safe” style.

Watch the payoff spot below.

Also Read: Why WWE's The Miz Worked So Hard to Get New Daughter Monroe Sky's Name Over

This reporter asked Miz if that criticism was the impetus for the “Holy S—!” chant-inducing moment. Apparently, I was the first.

“Honestly, it wasn’t. I didn’t even think of that, to be honest. That’s the first time I actually was asked that,” he said. “Honestly, when I hear people say that, I take it as a compliment. The reason being is that’s our job. Our job is to tell a story, for you to be involved in-depth with it, and to make everything look a certain way.”

“So, if people think I have a safe style or a soft style, that’s their own thing,” Miz added. “Me, I do whatever I feel is necessary for the story I’m trying to tell.”

Catch Miz telling those stories Monday on “Raw,” starting at 8/7c on USA Network — he’ll likely appear on Tuesday’s “SmackDown”  too. Season 1 of his and Maryse’s reality series “Miz & Mrs” returns with all new episodes Tuesday night beginning at 10:30/9:30c, also on USA.