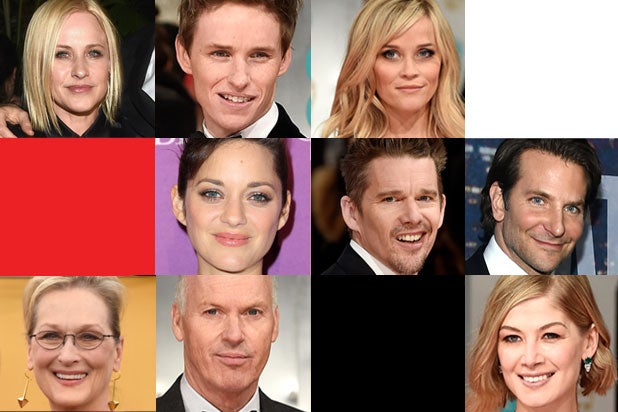 If the Oscars were truly a popularity contest — which some insist they are — the top acting trophies would go to Bradley Cooper, Reese Witherspoon, Robert Duvall and Meryl Streep on Sunday.

Those four thespians lead their categories — Best Actor, Best Actress, Best Supporting Actor and Best Supporting Actress, respectively — in Positive Q Score, an industry-wide measurement that ranks celebrities by their popularity. The Q Scores company and its president, Henry Schafer, also tabulate numbers for stars’ familiarity, and TheWrap got the first exposure to both metrics via newly compiled data.

In the Academy Awards-inspired study, Duvall actually topped all in both categories, with a Recognizability number of 85 and a Positive Q Score of 31 among adults 18 and older, the demographic used.

“He’s got a tremendous following 50-plus,” Schafer told TheWrap of Duvall’s gaudy numbers. “I was a little surprised myself.”

Schafer was also shocked by Michael Keaton’s big familiarity percentage — 79, second only to Duvall — he added.

While, Streep and Cooper both had Q Scores of 27; the “Into the Woods” star had a much higher familiarity score, at 77 to the “American Sniper” star’s 58. Witherspoon leads her own category with a lower 22 Q Score, but actually bests Streep’s recognizability with a one-point-higher score of 78.

Here’s how the Q Scores process — which is utilized industry-wide by talent agencies, movie studios, TV networks, etc. — works: Schafer’s pollsters interview 1,800 consumers age six and older, cross-referencing the data with current census information. The percentage of those respondents who recognize a celebrity based on carefully designed worded descriptions make up the Familiarity score. The percentage of those who consider the star in question one of their favorites makes up the Positive Q Score.

For this study, Schaefer’s team went into the field during the third week of January — well after the nominees were announced — and collected data over the subsequent three weeks.

Runners-up in each category are: Steve Carell (64 familiarity/24 positivity), Marion Cotillard (13/16), Edward Norton (54/21) and Emma Stone (61/18). In the weakest category in terms of total Q Score measurements — Best Actress — Felicity Jones is unmeasured. Schafer told TheWrap that his company will poll consumers for her data this summer. At this point, it’s important to point out that some polling is old: Norton’s comes from Winter 2007, Laura Dern’s (44/10) is from Summer 2011, and Cotillard’s was last compiled in Winter 2013.

To be fair to Redmayne and Pike, being relatively new on the scene doesn’t help matters. Anyone with less than a 15 in recognition provides unreliable Q Scores, Schafer specified.

The average scores among all performers measured by Schafer’s company are a 31/16. High water marks in the industry include Recognizability scores of 88 for Johnny Depp and Sandra Bullock. Meanwhile, Morgan Freeman’s 44 Positive Q Score tops his contemporaries. Too bad none of them are nominated.

Also Read: The Most and Least Liked TV Newscasters – From Scott Pelley to Chris Matthews