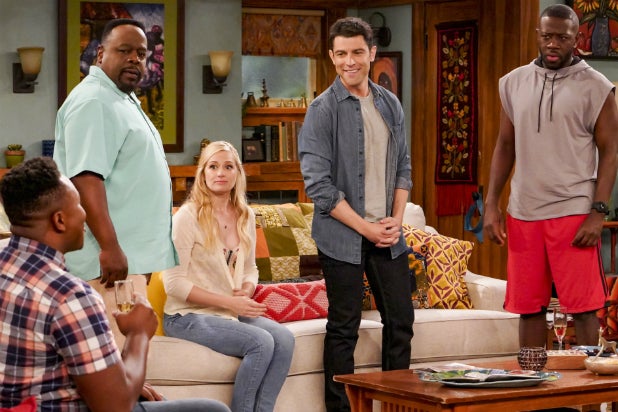 Yeah, there were a few titles changes and recastings on this one.

“The title change, I think it really was mostly about getting it to be as short and sort of punchy as possible, and as easy for recognition,” creator Jim Reynolds told TheWrap, during the sitcom’s panel at the Television Critics Association press tour Sunday. “And I believe one of the factors was not starting it with a W.”

When TheWrap asked if that’s because shows are listed in alphabetical order the executive producer confirmed, yeah, that’s why.

“As far as the recasting, we shot the initial pilot, which we were very proud of, but the network had been wanting to be in business with Max for a while, because of his obvious talents,” Reynolds said.

So when the opportunity arose to bring in Greenfield, CBS jumped at it.

“When we had the pilot and the network, who wanted to be in business with Max, [we] came to him and showed it to him,” Reynolds said, adding that they told Greenfield to let them know if he was interested. And he was.

“It was so well-done as far as I was concerned that it became sort of a no-brainer to do the show,” Greenfield said. The following day, he picked up the phone. “I called the next morning and was like, ‘Let’s get into it,'” he added. “Then I met with Jim and Cedric, and Cedric didn’t know who I was [laughs]. Was upset that he had to reshoot the show. But we got along great and here we all are.”

“You can’t deny if you look up here that this is an incredible cast,” Reynolds said. “I mean truly, like, some of them come from ‘Big Bang Theory,’ worked with the all-time greatest cast in multi-cam television. I can’t believe the people that are sitting up here with me. The talent is so deep.”

Cedric jumped in: “We were very proud of the original pilot. And of course everybody knows that when you do pilot season, it is a limited talent pool and everybody is, like, pulling and trying to find those people and, of course, you have timelines based on other things. Yet, once we shot the pilot, we knew that we had a great show, and the opportunity that is created, market was open with these two amazing talents, then we became the Golden State Warriors. We were like, ‘Alright, gimme him and him. Let’s go!'”

Behrs admitted she does feel a little guilty about replacing another actor, though Greenfield says he was mostly concerned about keeping up with the actors that remained.

“I think one of the reasons why they wanted to do the recast was because Cedric, Sheaun [McKinney], Marcel [Spears] and Tichina [Arnold] were so incredibly strong and had created this unbelievable dynamic and believable family that there was an imbalance — or it felt that way,” Greenfield said. “And I don’t know if it was on [the previous actors] or it was really just how good [Cedric, McKinney, Spears and Arnold] were.”

“Knowing that we were gonna come in and replace and be this other family, it was a daunting task,” he continued. “And God bless those other actors, but I did not think about them. I was just so nervous about can we… balance this out.”