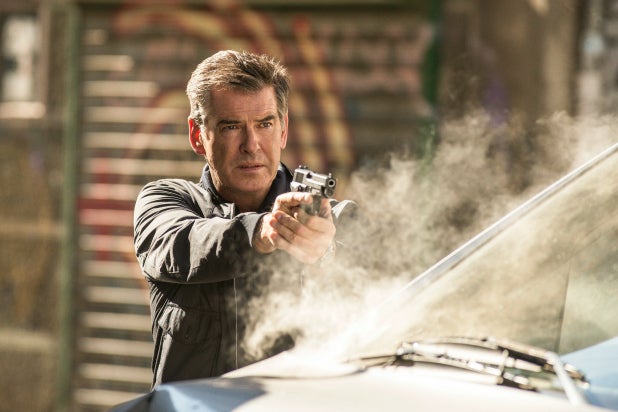 For its first third or so, “The November Man” is a perfectly serviceable spy thriller, a sort of take-your-dad alternative to “The Hundred-Foot Journey,” a take-your-mom movie if ever there was one. Both feature a beloved UK movie star, and both shamble along pleasantly from expected beat to expected beat.

Like “Journey,” “November Man” also goes off the rails, but its desperation surfaces earlier. You can tell that veteran director Roger Donaldson (“The Bank Job,” “No Way Out”) senses that he’s losing his audience when the music starts getting louder and the blood spray gets more slow motion-y.

Pierce Brosnan stars as Peter Devereaux, and when you’ve got a name like that, “spy” is pretty much your only career path. We first meet him in Montenegro in 2008, where he cautions his younger protégé David Mason (Luke Bracey, “Monte Carlo”) against forming attachments with women who could later fall prey to his enemies. (“If you want a relationship,” warns Devereaux, “buy a dog.”)

After Mason bungles a job and kills an innocent bystander, Devereaux retires to Switzerland, only to be called back into the field five years later by his boss Hanley (Bill Smitrovich). Devereaux’s mission to Moscow goes wrong, drawing him into a conspiracy revolving around Russian politician Federov (Lazar Ristovski), who has a shady past, and also bringing him face-to-face with Mason again.

Michael Finch and Karl Gajdusek’s screenplay, based on Bill Granger’s novel “There Are No Spies,” doesn’t lack for ideas, from long-buried secrets regarding the Russians and the CIA during the Chechen conflict, to Devereaux and Mason’s father-son relationship, to the espionage world’s cold and calculating use of agents’ friends and loved ones as pawns. None of this ever really connects, mainly because the characters in the film feel so flimsy and familiar, like half-baked recollections of people from better movies and books on the subject.

“The November Man” can coast on Brosnan’s screen presence for a while, and it’s certainly fun to watch Devereaux outgun and outmaneuver Mason at every turn — for a while anyway. Bracey, unfortunately, never registers enough to feel like real competition for his former mentor; it’s like trying to get invested in a battle between Captain America and a tuna sandwich.

Olga Kurylenko scores a few interesting moments as a Serbian social worker who becomes the target of a deadly Russian assassin, and Will Patton brings his usual unsettling officiousness to his role as Weinstein, a CIA higher-up of questionable morals. (Given how many writers and directors probably have pictures of Harvey on their dartboards, it’s surprising there aren’t more movie bad guys named “Weinstein.”)

This is the sort of film where the plot and even the action become so uninteresting that you start asking plausibility questions along the lines of “Why don’t they just off him already?” and “Really? She’s going to write an entire newspaper article on a public computer in a train station while at least three different people are trying to murder her?”

These are the distractions that keep us watching during these grim end-of-summer days. “The November Man,” after a promising start, turns out to be very much a late-August release.