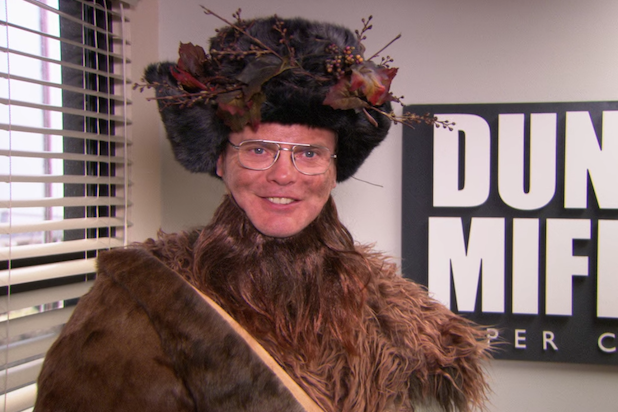 A Season 9 episode of “The Office” has been re-edited by series creator Greg Daniels and NBCUniversal to remove a scene featuring a character in blackface, TheWrap has learned exclusively.

The old version of Episode 909, titled “Dwight’s Christmas,” has been replaced by the new cut on Netflix — “The Office’s” streaming home until 2021, when the show (and the updated episode) moves over to NBCUniversal’s Peacock — and other platforms where it is available for purchase.

The new cut is also replacing the original for syndication airings on Comedy Central and other Viacom-owned channels, and the NBCUniversal-owned Cozi TV.

“‘The Office’ is about a group of people trying to work together with mutual respect despite the inappropriate actions of their boss and assistant manager,” Daniels said in a statement to TheWrap. “The show employed satire to expose unacceptable behavior and deliver a message of inclusion. Today we cut a shot of an actor wearing blackface that was used to criticize a specific racist European practice. Blackface is unacceptable and making the point so graphically is hurtful and wrong. I am sorry for the pain that caused.”

“Dwight’s Christmas” aired Dec. 6, 2012, on NBC. It focuses on Dwight Schrute’s (Rainn Wilson) attempts to get his coworkers at Dunder Mifflin excited about celebrating a traditional Schrute Family Pennsylvania Dutch Christmas in the office, which leads to him dressing up as Belsnickel, a St. Nicholas-like character in South German folklore.

The scene featuring blackface occurs when Oscar (Oscar Nunez) looks up Belsnickel on Wikipedia. He tells the office the character’s partner Zwarte Piet, or Black Peter, is “a slave boy often portrayed in colorful pantaloons and blackface.” Stanley (Leslie David Baker) tells Dwight in response, “Uh-uh. No, Dwight, no.”

Dwight responds, “Oh, come on. We don’t blindly stick to every outmoded aspect of our traditions. Come on, get with the spirit of it, you guys!” before quickly pulling out his phone and sending off a text.

It then cuts to warehouse worker Nate (played by Mark Proksch) in the office parking lot, preparing to come into the Christmas party dressed as Zwarte Piet, complete with blackface, until he receives that text from Dwight and immediately turns around. He shows up later in the episode with the majority of his makeup wiped off.

Also Read: 'Gone With the Wind,' 'Scrubs' and Other Movies and TV Shows Pulled in #BlackLivesMatter Era (Photos)

NBCUniversal’s decision to edit this episode of “The Office” comes on the same morning TheWrap exclusively reported Netflix removed an episode of “Community” that featured a character in blackface.

Earlier this week, two other sitcoms, “Scrubs” and “30 Rock,” pulled multiple episodes each that featured characters in blackface. Both were done at the request of the show’s creators.