It’s happening! A Lego “The Office” set is now available for preorder at Walmart with minifigs of 50 characters from the NBC sitcom, including Jim, Pam, Michael Scott and Dwight Schrute.

The 1,164-piece set will set you back $120 and comes with iconic props from the series, including Michael’s “World’s Best Boss” mug, Jim’s teapot, Pam’s engagement ring, and Kevin’s pot of chili.

The set, which follows the Lego-ification of other Must-See-TV NBC shows “Seinfeld” and “Friends,” was designed by Jaijai Lewis, with more than 10,000 fans voting for it on the Lego Ideas site.

Watch a promotional video by Lego below.

“I have watched ‘The Office’ a lot over the years, but once I started approaching it as a Lego designer I had to watch with a different perspective,” said the designer, Lewis, in an interview on the Legos site. “I spent a lot of time looking at the set and tiny details I wanted to recreate. I pulled blueprints of the set and got behind-the-scenes photos from crew members from the show that I referenced. But also it involved watching the show itself and figuring out what jokes from the show I wanted to reference in Lego form.”

Lewis worked on his model for nearly 9 years, but designers Laura and Chris Perron created the final version. “This project let me combine three things I love: my husband (Chris), ‘The Office’ and Lego bricks!” Laura told The Hollywood Reporter. “I’m really happy with how the reception desk turned out — its curve is very iconic, and we wanted to get it just right.”

“Jaijai did a great job refining the scope and scale of the model, and we created the final layout and structure to capture as many iconic angles as possible,” Chris said. “It was special being able to co-design this set with my wife, Laura; we felt we could play up the Jim and Pam dynamic.” 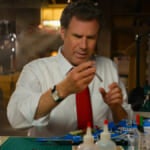 Also Read:
‘The Lego Movie’ Producer Details His Fight With Warner Bros. to Keep Live-Action Scenes With Will Ferrell