NBC’s hit sitcom “The Office” ended years before Dunder Mifflin employees would be forced to work remotely during a pandemic, but an artists collective under the moniker MSCHF is giving fans a way to imagine it via Slack.

Instant messaging application Slack has become one of the go-to methods for offices communicate solely online, including the Dunder Mifflin employees, according to MSCHF’s project “The Office (Slack)“. 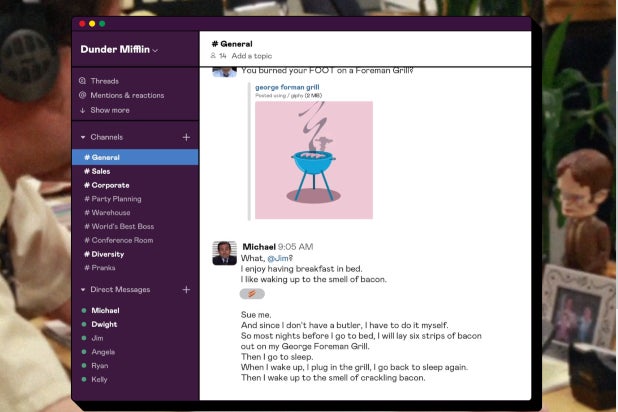 The project creates a functional Slack server complete with several channels (including corporate, warehouse, accounting and another just for pranks) the user can join to watch different scenes from the first season of “The Office” play out live. When a user joins they are technically also given the ability to post, though MSCHF discourages it — “DO NOT post in show channels,” the site said. Moderators are employed 9-5 to keep tabs on the channels and keep out nefarious messengers.

The episodes take awhile to play out via instant message, so it could be two to three weeks before they air on Slack.

“Since ‘The Office’ aired, the nature of work and office culture has changed drastically, a lot of which is centered around the way we use technologies,” MSCHF head of strategy Daniel Greenberg told The Verge Monday. “This is a live experience by real people Mondays through Fridays, nine-to-five.”