“The Orville” Season 3 has finally received a premiere date from its new home platform Hulu, the streaming service revealed Thursday, along with a teaser for the new season, dubbed “The Orville: New Horizons.”

The third season of the Seth MacFarlane sci-fi series, which aired its first two seasons on Fox, will debut Thursday, March 10, 2022, on Hulu, with new episodes rolling out weekly after the premiere.

Per Hulu, “Seth MacFarlane’s epic space adventure series “The Orville” returns exclusively as a Hulu original series. Set 400 years in the future, “The Orville: New Horizons” finds the crew of the U.S.S. Orville continuing their mission of exploration, as they navigate both the mysteries of the universe and the complexities of their own interpersonal relationships.” 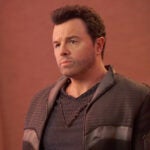 Also Read:
‘The Orville’ Moves From Fox to Hulu for Season 3

You can watch the teaser for “The Orville” Season 3 via the video above.

In July 2019, it was announced that the “Star Trek”-esque show would move from Fox to Hulu for its third season. At the time, an insider told TheWrap that “Orville” studio 20th Television (formerly 20th Century Fox Television) and MacFarlane worked closely with the broadcast network and streaming service to make the shift happen, as Fox had already renewed the series for Season 3 back in May of that year.

“‘The Orville’ has been a labor of love for me, and there are two companies which have supported that vision in a big way: 20th Century Fox Television, where I’ve had a deal since the start of my career, and Fox Broadcasting Company, now Fox Entertainment, which has been my broadcast home for over 20 years,” MacFarlane said in a statement at the time. “My friends at the network understood what I was trying to do with this series, and they’ve done a spectacular job of marketing, launching and programming it for these past two seasons.”

He added: “But as the show has evolved and become more ambitious production-wise, I determined that I would not be able to deliver episodes until 2020, which would be challenging for the network. So we began to discuss how best to support the third season in a way that worked for the show. It’s exactly this kind of willingness to accommodate a show’s creative needs that’s made me want to stick around for so long. I am hugely indebted to Charlie Collier and Fox Entertainment for their generosity and look forward to developing future projects there. And to my new friends at Hulu, I look forward to our new partnership exploring the galaxy together.”

“The Orville: New Horizons” is produced by 20th Television and MacFarlane’s Fuzzy Door.