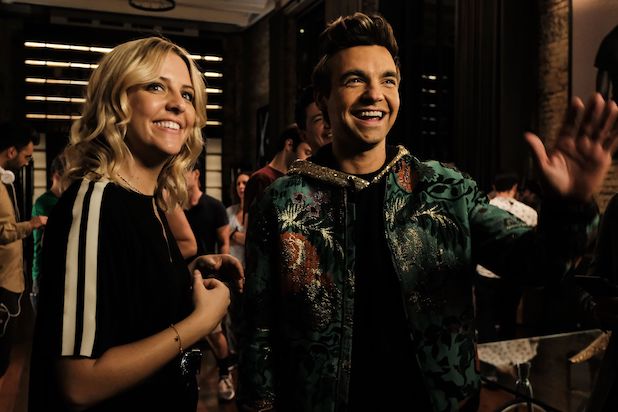 It would be really easy for Comedy Central’s new show, “The Other Two,” to take cheap shots at internet fame, seeing as it’s about a 13-year-old boy who becomes an online sensation overnight — thanks to his viral song “Marry U at Recess” — and his two older siblings who have to learn to cope with being, well, not famous.

But even though Cary, an aspiring actor (Drew Tarver), and Brooke (Heléne Yorke), a former professional dancer, are definitely jealous of their little bro, Chase (Case Walker), the comedy “pokes fun at the characters” more than the industry itself.

“I don’t know that it critiques celebrity culture and the industry,” Yorke told TheWrap of the show, which hails from Lorne Michaels and recent “SNL” head writers Chris Kelly and Sarah Schneider. “I think it lovingly points to the pitfalls. And that is necessary and so right and the balance is so great. Nothing feels like it’s being a d–k about anything, you know what I mean?”

Also Read: Ilana Glazer and Abbi Jacobson Have 'Known for a Few Years' How They Wanted 'Broad City' to End

And Yorke’s character — who is an interior designer when we first meet her, but is soon unemployed and also kinda homeless and definitely nowhere near as successful as Chase — is definitely poked fun at a lot.

“I think she’s a classic case of somebody who is a bit of a mess, but doesn’t necessarily know it,” Yorke said. “And she’s just sort of throwing her body around wondering where she’s going to land. And thinking she was going to be a dancer, she had this path laid out for her and it didn’t turn out exactly the way that she expected, and so much of life doesn’t. We’re all victims of our own expectations.”

But Brooke very much leans into what this newfound fame for Chase–  or “ChaseDreams,” as their mother (played by Molly Shannon) dubs him — can do for her.

“I think instead of placing any kind of jealousy and resentment on it — where Cary has to examine himself and whether or not he has been successful in his own life — Brooke looks at it like, ‘Oh this is great. How can I take this and run with it? How can I make this part of my story?'” Yorke said.

And part of her story is going to be revisiting her dance career during the show’s first season — though Yorke wouldn’t tell us exactly how or when she’ll hit the stage.

“Well, not to give too much away,” Yorke said. “I don’t want to say in which context, but yes, there is a way my former dance life does get revisited and dragged out in a very funny wonderful way, related to Chase specifically. I ended up in rehearsal with [choreographer] Kat Burns and, like, a bunch of Beyonce backup dancers totally losing my mind, and had the best time for like three days. I felt muscles I didn’t know I had.”