“The Outpost” will conclude after Season 4 on The CW, the network revealed Wednesday.

An individual with knowledge of the decision told TheWrap the network and the producers mutually agreed to end the show with its currently airing Season 4 after production had begun.

The fourth season — and now series — finale of the summer drama will air Thursday, Oct. 7 at 9/8c.

Here’s the official description for “The Outpost” Season 4: 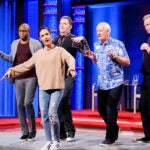 Also Read:
The CW Renews ‘Burden of Truth’ and ‘The Outpost’ for Season 2 Runs in Summer 2019

“After Gwynn (Imogen Waterhouse) sacrificed herself to destroy Yavalla, the Outpost needs a new ruler. But while Talon (Jessica Green) and Garret (Jake Stormoen) try to establish new leadership, a sinister threat awakens, revealing the true origin of the mysterious kinjes. Talon and her kinj-bearing friends all share dark visions from god-like beings who are hell-bent on reclaiming the kinjes for themselves. A would-be assassin named Luna (Maeve Courtier-Lilley) hunts Talon down to get vengeance for crimes of the past, but soon discovers that her own heritage is wrapped up in Talon’s fate. Mourning the recent loss of her beloved Tobin (Aaron Fontaine), Falista (Georgia May Foote) is mentored by Two to dedicate herself to the new “gods” in exchange for a costly favor. But when the Lu Qiri go missing, Talon and Zed (Reece Ritchie) track them down to discover the greatest threat the Realm has ever faced… a new race of beings that will ultimately explain Talon’s own dark origins. When Janzo (Anand Desai-Barochia) and Wren (Izuka Hoyle) are forced to unlock an ancient city beneath the Outpost, they struggle to uncover who their real allies and enemies will be, while a secret they share gives them new motivation to save the world. As she and her friends are hunted down one by one, while diabolic forces are tearing her world apart, Talon endures the darkest challenge she has ever faced, as she struggles to embrace the heroes of her past and somehow survive the villains that only she has the power to destroy.”

“The Outpost” debuted on The CW in summer 2018, after originally being ordered as a Syfy International series for international broadcast and then being acquired by The CW.

Created by Kynan Griffin and Jason Faller, “The Outpost” is executive produced by Dean Devlin and Jonathan Glassner, as well as Electric Entertainment’s Marc Roskin and Rachel Olschan-Wilson and Arrowstorm Entertainment’s Faller and Griffin in association with Balkanic Media.