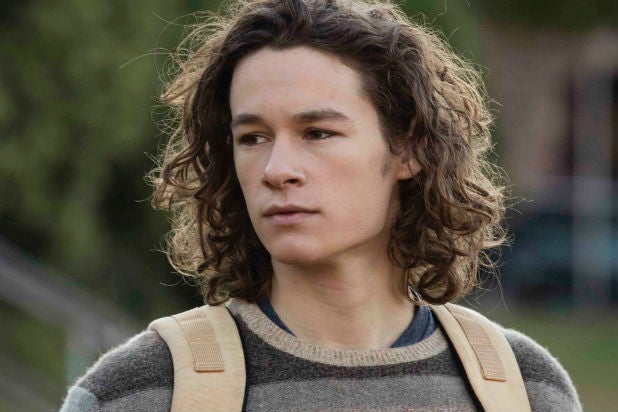 It’s not easy to break out in a star cast that includes Hugh Dancy, Michelle Monaghan and Aaron Paul — but place your faith in Kyle Allen, a notable newcomer in Hulu’s “The Path.”

The 21-year-old plays the teenage son of Monaghan and Paul. The family members are devotees to the Meyerist movement, a New Age faith that has drawn comparisons to real-life churches like Scientology or The Way.

Such belief systems are having a resurgence in creative content. Karyn Kusama‘s stunning indie “The Invitation” plays on a similar theme while the upcoming documentary “Holy Hell,” produced by Jared Leto, exposes a real-life guru and how he affects a Los Angeles community.

Allen spoke with TheWrap about playing a young man raised on the fledgling faith, why these systems are so attractive and his how he spends his free time (hint: It’s on or near a flying trapeze).

THEWRAP: This is a fantastic group to play with, how did the opportunity come up and was it the type of thing you’d expect to land?
KYLE ALLEN: It wasn’t something I expected to be interested in … the trials and tribulations of a family and how belief divides us. But then you read it and it’s: ‘Oh my God. I just have to read the next script.’ It became a competition on set, who had read the next script and who hadn’t, just to find out what was next.

You play the 16-year-old son of Aaron and Michelle, who is surprisingly intense in his belief.
His name is Hawk. He’s an actual bird. [Laughs] He’s grown up in an environment where he’s been pulled in several different directions by several different forces. He’s trying to find security and a sense of who he is, different ways to identify himself. This environment is crazy but not to him. At his age, the kids in his movement are forced to go to school so they know what it’s like and what’s really out there in the world.

But when they’re 16, they can join the movement [as adults] and cease contact with the outside world. He’s right at the cusp of that. He’s about to turn 16 and he wants to run into this head first. His dad wants him to wait, and he’s really angry.

Many people have noted similarities in [show creator] Jessica Goldberg’s Meyerism to real-life programs like the 12 Step or some facets of Scientology. Is that something you as an actor are aware of when you’re working?
You can make these assimilations yourself as an actor, but there’s nothing explicit in the notes like, “This is from the 12-step program. From Scientology.” That’s not part of it. But you also draw from your life for your character — but Jessica made this religion from bits and pieces she found all over.

We actually have a two- to three-page bible for the cast with everything there, the pillars of what Meyerism is. And that’s what makes it so compelling, the answers are right there.

In terms of the new wave practices like what Meyerism seems to evoke, why do you think it’s appealing? What attracts people?
I choose to believe, in an idealistic way, that the center of every person has a basic desire to do what’s good. Or a desire of the right thing. Getting off of a line of so-called bad activity, you want to jump in the other direction. And then you have this clear picture of what is good — and it’s written in pamphlets and books. Imagine being in a vulnerable position and getting handed that book or pamphlet? That’s it. You’re set. I would say that’s incredibly attractive, to have all those questions answered.

No more heavy faith questions. I hear you’re a trained ballet dancer.
I went to the Kirov Academy of Ballet in D.C. I was an acrobat before that. If you have a circus, I’ll come and juggle or just fall down and get back up again.

A new episode of “The Path” is uploaded to Hulu.com every Wednesday through May 25.