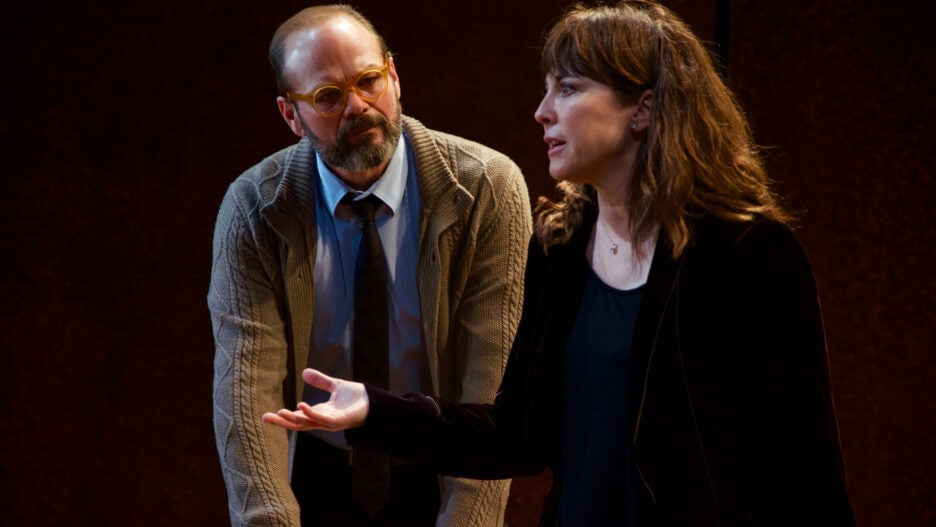 Have you ever been in a theater where almost no one gets up during the intermission? If you answer yes, chances are you’ve been to a David Mamet play. He’s into writing these 70-minute plays and throwing in an intermission to make people believe he’s delivered a full evening in the theater. If only he would also add more characters, plot, substance.

Mamet’s new one, “The Penitent,” which opened Monday at the Atlantic Theater Company, isn’t so much a play as an argument. Mamet watchers are used to that. What makes “The Penitent” not only thinner but also phony is the final scene where a character lets go with two bomblets that pretty much negate the previous 70 minutes. You will not feel so much enlightened as cheated. It’s like that short story grade school students write where everything is revealed, at the very end, to have been a dream. Not that “The Penitent” is ever riveting, except in some of the downright looney things Mamet’s characters say, as if they inhabit an alternate universe or one that no longer exists.

A put-upon shrink (Chris Bauer being convincingly distraught throughout) has been accused of bigotry because he once wrote about homosexuality being “an aberration.” The problem is he didn’t. He instead wrote in some paper that it’s “an adaptation,” and a newspaper of record merely misquoted him. The shrink never gets around to revealing what makes homosexuality an adaptation, like that would make everything okay. Instead, the shrink and his wife (Rebecca Pidgeon indulging in the most overwrought mid-Atlantic accent this side of Norma Shearer) argue about how their lives have been ruined because it’s not enough that the newspaper of record wants to settle the matter by printing a retraction. This couple has apparently never heard of social media or 24-hour cable news, and Mamet is writing about the awesome power of print as though it’s 1984.

Complicating matters is that the shrink counseled a young homosexual, who went on to shoot ten people, hence the media’s interest. The shrink’s lawyer (Jordan Lage) advises him not to fight the newspaper of record because they have all the money in the world (more echoes of 1984, if not 1964), and after all, the media have already turned the mass murderer into the victim and the shrink into the villain, since the mass murderer might have a civil rights case on his hands because gay people are so good at playing the special-rights card.

But not to get worked up! Those two end-of-play bomblets let us know that nothing is as it first appeared.

Tim Mackabee has designed a stunningly spare set, composed of two walls, two chairs, and one table. In between the play’s many scenes, Donald Holder’s lighting design brings the illumination down to an ominous level. Under Neil Pepe’s direction, the actors move the chairs and table every which way in the relative darkness, while the two walls remain stationary, like monoliths from “2001: A Space Odyssey.” It is amazing how many ways there are to arrange two chairs and one table.