(Spoiler alert: Please do not read on if you haven’t seen Tuesday’s episode of “The People v. O.J. Simpson” on FX)

Five months after “The People v. O.J. Simpson” finished filming and five months before many of the cast and producers will arrive to the Emmys as nominees in September, Ryan Murphy and his “disciples” — including John Travolta, Sarah Paulson, Nathan Lane, and producers Nina Jacobson and Brad Simpson — launched an Emmy cam season finale at the Ace Hotel in downtown Los Angeles Monday night.

They gave a packed house of Emmy voters an advance screening of the finale and discussion with nearly all the key cast and producers, where Cuba Gooding Jr. (who plays O.J. in the FX hit) publicly anointed the “American Horror Story,” “Glee” and “Nip/Tuck” creator Murphy with divine credentials.

Producer Brad Simpson noted that in Gooding’s retelling of their initial meeting, the “Jerry Maguire” actor writes Simpson and Jacobson’s participation out of the story. In response, Gooding proclaimed that when you are in the room with “Jesus” ( a.k.a. Murphy), you don’t look at the disciples (Jacobson and Simpson).

Good-natured in tone, Gooding’s calculation was just one of many signs of affection between a cast and crew that seems to genuinely like each other. 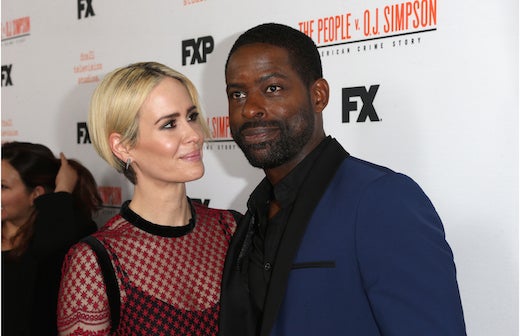 “We still love each other,” Brown told TheWrap, a feeling that was returned by the rambunctious crowd of Emmy voters in the audience that cheered every act break. Brown could back that up with evidence that would make the real Chris Darden (who claimed to TMZ that he was not watching the show) proud. 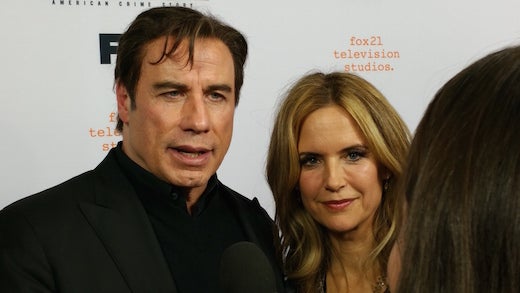 Exhibit B: Travolta (a producer on the series who played dream-team strategist Robert Shapiro) patting Gooding on the knee during one of his typically energetic moments.

Exhibit C: The actors who spent the most time together as “the defense” sat together in the middle of the panel, with Travolta and Coutney B. Vance (Johnnie Cochran) still bookending Gooding, their on-screen client.

Exhibit D: Vance brought his own DSLR camera on stage to shoot photos of his co-workers on the panel, looking like an excited parent at a school play.

And the audience packed was just as wired. In a “where are they now?” epilogue, they jeered villain Mark Fuhrman’s face on screen, cheered for the news of O.J.’s subsequent conviction for kidnapping, and groaned when that was followed with a kicker that he is eligible for parole in 2017. Overall though, they loved the lawyers from both sides: Paulson, Vance and Brown, especially the latter.

“It’s a star making performance,” Jeffrey Toobin announced when introducing Brown to the room. (Toobin wrote the book on which the series is based, and moderated a giant panel admirably, hitting everyone including Connie Britton, relegated to the far end of the stage as bit player Faye Resnick.)

When did the producers realize they were sitting on a hit?

“At one point early on [in the season’s airing], it was 100 percent critical and audience acclaim,” Travolta told TheWrap as the finale began screening in the theater. “I had never seen that before. Right away we saw that that there was a response to the quality of the show.”

Brown knew earlier, before he even left the set. Murphy showed an early cut of the first episode to a seen-it-all crew before production wrapped around Halloween last fall.

“The editors would come up to me and be like ‘Yo man, it’s cutting together really nice. Congrats,’ Brown said. Following in the footsteps of his best bud Paulson who famously said she’s not watching the show, Brown admitted he did not start watching until a few episodes in.

“Not until like Episode 4 got to the air did I start watching,” Brown admitted. “I was like … ‘Ah! This is a good show’.”

FX is hoping the rest of the Emmy voters who were not amongst the cheering (and chomping on Bottega Louie box lunches) feel the same way. However, they had better check Paulson‘s ballot twice.

In defending Toobin’s Wikipedia-speak assertion that Resnick is a “historical figure,” the actress was unequivocal.

“‘Real Housewives of Beverly Hills’ [on which Resnick appeared] is the best show on television,” she claimed.

Sorry Sarah. On this one, you’re also going to lose the Emmy jury.