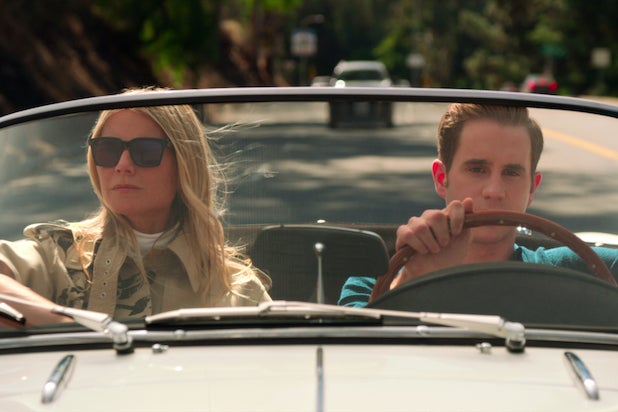 (Warning: This post contains spoilers through the Season 1 finale of “The Politician.”)

And just like that — after resigning from high-school politics, saying goodbye to his mother, having his Harvard acceptance rescinded, several twists of fate and a three-year time jump — Payton Hobart is back in the race.

In the closing moments of the Season 1 finale of Ryan Murphy’s new Netflix series “The Politician,” Payton (Ben Platt) decides to run against longtime incumbent Dede Standish (Judith Light) in the New York State Senate race, with his old high-school classmates (some friends, some frenemies and one former lover) assisting in his election campaign.

“I feel super excited. Superficially, because I get to stay at home in New York and make the show here, which I’m very excited about (laughs),” Platt told TheWrap of the second season of Murphy’s show. The show locations from Santa Barbara, Calif. to New York City, thanks to the time jump on the Season 1 finale. “And also because I get to go toe-to-toe with Judith, which, since she’s one of my favorite actors and human beings, that’s been incredibly exciting professionally.”

Also Read: 'The Politician's' David Corenswet Loves Ben Platt's Rendition of 'River' Just as Much as You Do

Platt says on Season 2, “you’ll get to see Payton more in the adult world and how his tendencies and behaviors hold up against real adults,” who are different from his “glamorous and loving” mother Georgina (Gwyneth Paltrow).

Those “real adults” being Dede Standish and her chief of staff Hadassah Gold (Bette Midler), who McAfee (Laura Dreyfuss) goes to work for after graduating from Columbia early with a double major in political science, only to find their offices and attitude disheartening. She and James (Theo Germaine) — Payton’s former campaign managers from his high school election days — turn to Payton, now attending NYU, and asks him to run against Dede using the problems with the NYC subway system as his platform. He eventually caves, after an internal pep talk from the deceased River (David Corenswet) and his old enemy Astrid’s (Lucy Boynton) reveal that the married Senator Standish has a scandalous secret: she’s in a “throuple.”

All of this on top of the fact that Payton now has the support of McAfee, James, Astrid, plus his two old running-mates — Skye (Rahne Jones), who tried to poison him, and Infinity (Zoey Deutch), who unbeknownst to her had fake cancer — and even his ex-girlfriend Alice (Julia Schlaepfer), who left her fiance at the freakin’ altar to be by his side.

“I think he feels an emptiness when he’s not on that one-track mind and when he’s not driving forward with his ambition,” Platt said. “I think he feels a bit aimless, even though he’s able to connect with other people much more easily and he has empathy. I think he feels a little bit useless. And I think when he gets a taste of how galvanizing he can be when all of his friends rally again around him and he is reminded of that sweet feeling and how beguiling that is, he can’t help but lean back in.”

McAfee orchestrated Payton’s comeback because she “believes in Payton and sees something in him that is special.”

“He wakes up every day trying to change the world and he’s thinking of a million different ways of how he can do that and I think that she sees his goodness,” Dreyfuss told TheWrap. “And I think that’s what she’s rooting for and that’s, in her mind, her best ticket. So I do think that she rallies behind him because she truly believes in him and what he’s capable of.”

Though Corenswet doesn’t know much about Season 2, he did tell us this: “The only thing I know for sure is that River will stay with Payton as he goes on to bigger and better things, to bigger and more serious campaigns. I think that’s the beauty of starting with their relationship, that’s going to be something Payton draws on for however many seasons they do, for the rest of his career. I think it’s possible River will show up again in body or spirit, but I don’t know.”

Jones said the cast hasn’t received scripts for the second season yet, but she’s “fascinated by the three-year time jump, because obviously a lot went down.” (Remember: Her character, Skye, poisoned Payton in high school, which led McAfee to break up with Skye. But in the Season 1 finale, Payton and Skye hang out amicably, like the hatchet has been buried.)

“And I’ve tried to play out in my mind, like, ‘What happened? Did they have a sit-down meeting where they squashed everything?'” Jones told TheWrap. “Because some stuff went down and I don’t know if that’s absolutely forgivable, but I think that says a lot about Payton how he acts. And we also don’t know how the other characters feel about it. It’s one of those things like, Skye is here, but can she be trusted? So that’s one of the things I’m fascinated to learn. But I don’t know!”

Platt says that’s one of many lingering plot points that will lead “The Politician” into its second season.

“Hopefully there are a lot of things that are left very purposefully unresolved so there can be things in the second season that we want to hear more about,” Platt said. “But I think, ultimately, in high school the stakes seem a lot higher than they really are and part of what Ryan is poking fun at is something as dire as being poisoned or a rivalry or nemesis, a few years removed from high school, can seem like a very small thing.”

Platt also thinks all of these characters feel a lack of direction and a lack of something to believe in. “And Payton takes that on for them and he’s always been a driving force,” he says. “And whatever any of them have felt about him — whether it be Skye or Astrid or his actual friends and allies — I think they can all admit that he is incredibly committed to his ambition and I think it’s inspiring for anyone to be around that, whether or not they were able to respect that in high school or not.”

“The Politician” is streaming now on Netflix.