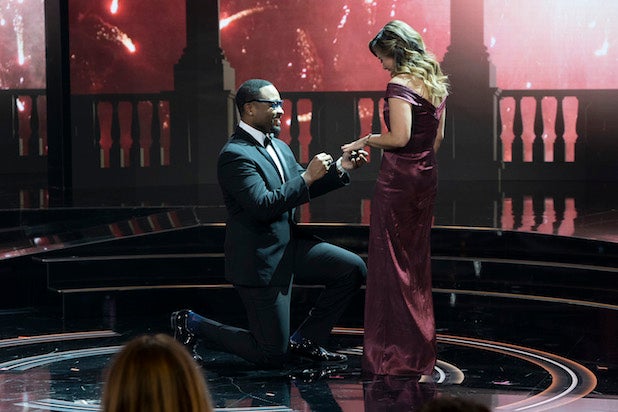 “The Proposal” wasn’t accepted by many viewers Monday night, tying a series low in the key adults 18-49 range for its Season 1 finale, according to overnight numbers from Nielsen.

And while its home network, ABC, still tied for first in the key demo with NBC for the evening, it was the latter network who won the overall eyeballs trophy, thanks to another highly-rated “American Ninja Warrior.”

ABC and NBC tied for first in ratings with a 1.0 rating/5 share and 1.0/4, respectively, in the advertiser-coveted 18-49 demographic, according to preliminary numbers.

NBC was first in total viewers with an average of 4.9 million. “American Ninja Warrior” posted a 1.1 rating/5 share and 5.8 million viewers overall from 8 to 10 p.m., tying its season high among total viewers. The network aired a repeat of “America’s Got Talent” at 10 p.m.

Telemundo was fourth in ratings with a 0.5/2 and fifth in viewers with 1.4 million.

Also Read: Ratings: NFL on Fox Overrules NBC's 'Trial and Error' Finale - and Everything Else

Univision and CBS tied for fifth in ratings with a 0.4/2.

Univision was sixth in viewers with 1.2 million.