Though the Golden Bear-winning Turkish filmmaker Semih Kaplanoglu is listed as the director on his latest drama “Commitment,” Kaplanoglu says the real person calling the shots on set was still in diapers.

Yes, one of the stars and most important components to “Commitment” was a young baby no more than 1 year old named Zeynep. Kaplanoglu referred to the young girl as the “hero” of the film and hopes that the movie will become a great memory for her when she’s old enough to watch it.

“The real director of the movie was the baby,” Kaplanoglu told TheWrap’s Steve Pond following a screening of the film Monday night via a translator. “The baby’s emotions, she enlightened our way, and the way she was trying to communicate with us without any words directed my story and my movie.”

Also Read: 'Spider' Director Left Chile Just Before Political Protests Broke Out: 'I Will Return Tomorrow to Another Country' (Video)

Kaplanoglu was joined by the film’s star Kubra Kip and co-producer Furkan Yesilnur in a panel discussion held at the Landmark Theatres in Los Angeles Monday. And they clarified they technically filmed with four babies who all played the part of Zeynep.

But the baby is surprisingly given a large amount of screen time in the 135-minute-long drama, and Kaplanoglu said he aimed to understand the world from the baby’s point of view. The way babies manage to expressively communicate silently and without words governed how Kaplanoglu approached his film, which is often light on dialogue but big on emotion.

“Commitment,” which is Turkey’s official submission to this year’s Oscars, is the story of a wealthy new mom in Turkey named Asli (Kip) who is desperate to return to work after months off for maternity leave but who grows jealous of the attachment Zeynep forms with her new nanny. This film, subtitled “Asli,” is also the first film in a planned “Commitment” trilogy in which Kaplanoglu will attempt to explore the family bonds between different characters and genders and how children come to terms with their relationship with their parents.

Also Read: 'Instinct' Star Carice van Houten on How She Had to 'Dig Deep' to Play Prison Therapist to a Serial Rapist (Exclusive Video)

“I realized I am after my own personal story. I looked at my pictures when I was a baby and my mom’s youth pictures who is now in her 90s. I tried to remember my first and oldest memories in this world,” he said. “The starting point of ‘Commitment’ are the feelings of a small child who discovers her loneliness while trying to cope with her problems that she’s yet unable to express.” 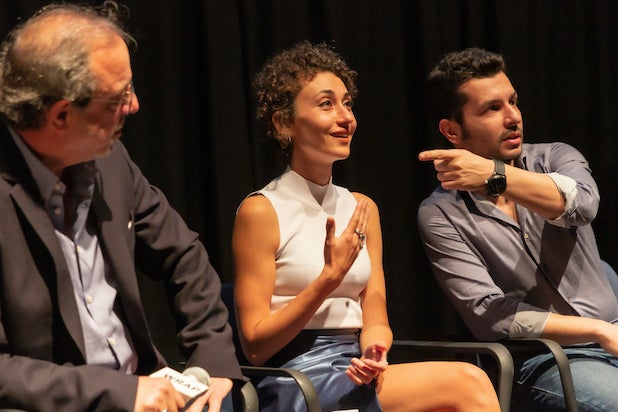 Kip further explained that she had spent so much time with the several babies on set trying to form a motherly connection that she was concerned that the real mothers might feel the same jealousy that her character felt toward the nanny.

“I should admit, it was quite difficult. Before we started, I tried to spend time, as much as possible, with her. The baby has her own personal space, and we kind of invaded hers and worked there. So at the end of the process, I just found myself as kind of her second mother,” Kip said. “I was afraid that maybe her real mother would feel the same thing as Asli did in the movie when the babysitter became the baby’s kind of second mother and thus I was more cautious about it.”

Neither Kip nor Kaplanoglu have children, so their goal with “Commitment” was to look at their relationships with their own mothers to understand how we inevitably inherit the traits of our parents.

“In the world that we live, I believe that women are really suffering. Especially in the modern world, on one hand, they have their own nature, their life and their work. And on the other hand, they have family, husband, children and home. To take care of such both worlds, is really difficult,” Kaplanoglu said. “Making this movie was like a kind of thanksgiving to my mom so as to focus on this issue.”