Faced with the same problem as every other medical drama producing new episodes amid the pandemic, Fox’s “The Resident” decided it had a responsibility not to shy away from the real-life impact of COVID-19 in its fourth season — but that it also had an obligation to its fans to focus on the characters and stories they love.

The solution the writers and producers arrived at was to devote Tuesday’s Season 4 premiere to telling the story of the early days of the pandemic in flashbacks while focusing on the long-awaited wedding of Conrad Hawkins (Matt Czuchry) and Nic Nevin (Emily VanCamp) in the post-pandemic timeline where “The Resident” will exist for the remaining of the season.

Also Read: '9-1-1'/'Lone Star' Crossover to Air in February on Fox - Find Out Who Is Heading to Austin (Exclusive)

Lamas co-wrote the Season 4 premiere with Eric I. Lu, using her own experience on the frontlines of COVID-19 to shape the tumultuous flashback storyline that is told during Nic and Conrad’s wedding, which Chapman says is full of “hope and the joy.” 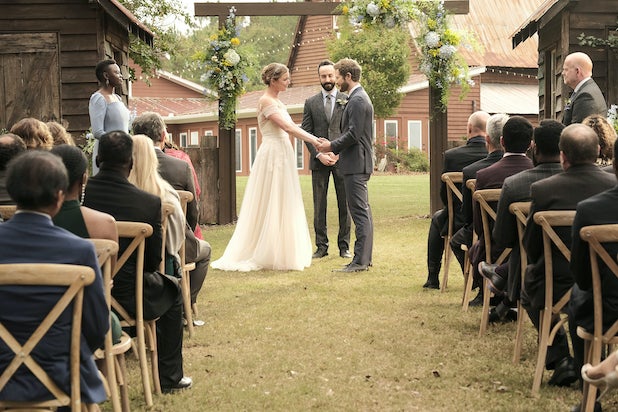 “It’s this incredibly powerful, moving story of how our characters and how doctors across the country dealt with COVID and, really, dealt with the biggest medical story of our lifetime, in our premiere. So we decided that this was going to be our memorial, if you will, or our honoring of doctors in our premiere episode and that we would tell the story in flashback of when the first wave of COVID hit our hospital, Chastain, in Atlanta. So we’re setting it in the first, tumultuous scary days of COVID that we all remember in 2020. But, at the same time, we also made this calculated decision that we didn’t want to run a whole season of COVID stories because we suspected that — by the time we made it to air — the nation would have been in lockdown for a long time and so sick of COVID that the last thing they wanted was to turn on a medical show that was going to be endlessly talking about the thing that we’re all living through.”

Though Fox announced “The Resident,” along with the network’s other scripted primetime series, wouldn’t return until midseason due to pandemic-forced production shutdowns, the writing team was able to safely began crafting this story late in the spring. 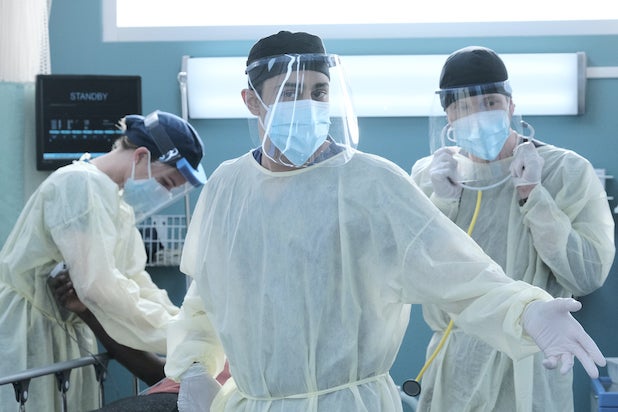 Chapman continued: “We’re never going to live in a post-COVID world, but it’s a world in which the pandemic of COVID has been knocked down. And we’re back to sort of normal life. And we felt like our audience was going to want to see a hopeful, joyous world in which the pandemic was knocked down and people were not talking about COVID every single day.”

The audience also won’t have a constant visual reminder of the coronavirus when they tune into “The Resident,” because the Fox drama will not keep its health care workers masked up at all times.

Also Read: 'The Masked Dancer': Here Are the Leading Guesses for Identities of Season 1 Contestants

“We decided that this is a world in which we won’t have to wear masks all the time. And that again was a calculated decision because we know that in a hospital, even with every single health care worker vaccinated and even with the majority of Americans vaccinated, you’re going to be seeing health care workers wearing masks for a long time. So we took a little bit of dramatic license, but we did it because we felt our audience was going to want to see that.”

Speaking of what you really want to see, Chapman knows it’s Nic and Conrad together, finally, and he’s happy to give it to you at a time like this. But just because the couple is saying “I do” doesn’t mean their story is over.

“This has been our central love story — it was on and off at the beginning of our show and then it became on, now they get married. So what we really wanted to do is a couple of things. One, Nic is a nurse and Conrad is a doctor, so what is that sort of complicated relationship between a married couple — one is a doctor, one is a nurse — how will that play going forward? And also, just the idea of what does it look like to be a married couple in a workplace and how do you navigate those things because there are lots of married doctors and nurse out there. And it’s not always an easy thing. I can’t do the big reveals of what’s coming for the season — but I can tell you that there are some serious ups and downs for them in married life. We just shot our Episode 5 and it’s all about Nic and Conrad, it’s about their relationship, it’s all about what happens to them and it’s going to be explosive.”

Also Read: 'This Is Us' Reveals True Fate of Randall's Birth Mother

“Explosive” might sound bad, but Chapman promises things are going to go well for these two from here on out. 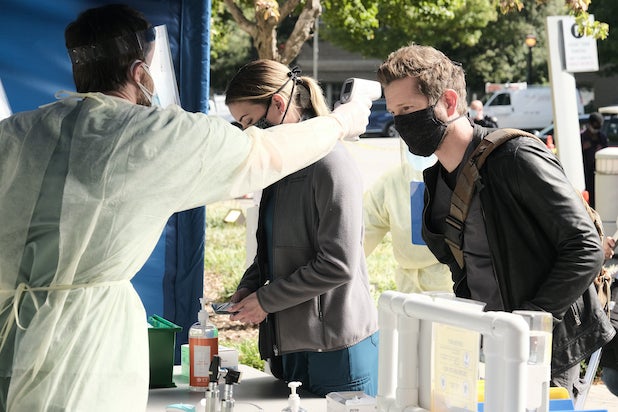 There will be plenty of drama to go around on “The Resident” — which also stars Jane Leeves, Manish Dayal, Bruce Greenwood, Shaunette Renee Wilson, Malcolm-Jamal Warner and Morris Chestnut — as Chastain Memorial is going to be turned into a public hospital due to financial hardship brought on by the pandemic.

“The Resident” has a 14-episode order for its fourth season, which Chapman says they are currently “on to track” to hit production-wise and should finish airing by mid-May.

“Obviously, the pandemic, COVID, the protocols and restrictions that we have on filming have been tough for us, but not as tough as they have been for other shows,” he told TheWrap. “I think our show has handled it really well. We haven’t had big shutdowns, the protocols on set have been working spectacularly well. People have been sick, but nobody has been terribly sick. And nobody on our set has transmitted the virus from one person to another on set. We’ve had zero transmissions in the workplace, which is also fantastic. It shows our safety precautions are working.”

“The Resident” Season 4 premieres tonight, Tuesday, at 8/7c on Fox.