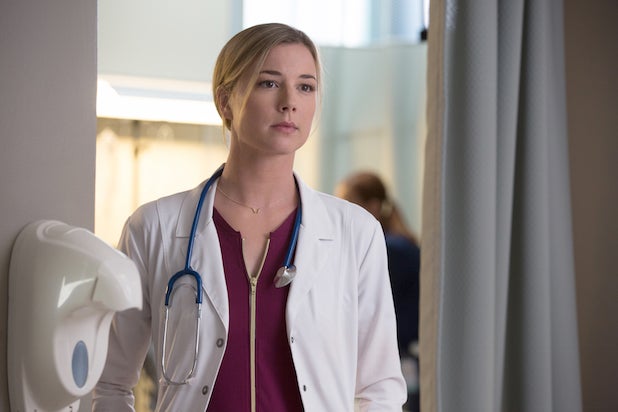 Fox’s new medical drama “The Resident” hasn’t even premiered yet and it’s already planning to tackle one of the biggest topics permitting the zeitgeist now: sexual misconduct. But star Emily VanCamp told TheWrap the series was gunning for that issue even before the accusations began to pour out in Hollywood late last year, and the subsequent start of the #MeToo movement.

“That happened right after, which was bizarre,” VanCamp told TheWrap during the Television Critics Association press tour earlier this month. “In fact, I think [the show] probably would have, I don’t know, taken it a bit further, had we known. We sort of knew some of it. But no, we were going to tackle this story either way. But that sort of lent itself to it.”

VanCamp stars as nurse Nicolette “Nic” Nevin in the upcoming series, which follows Dr. Conrad Hawkins’ (Matt Czuchry) final years of training, while exposing the dark side of the medical industry. One of the show’s first episodes will focus on her character experiencing sexual harassment at the hands of a baseball star in the hospital.

“She is going up to the VIP wing to get these baseballs signed for the kids in the pediatric ward,” VanCamp said. “And he’s an athlete — kind of a pig. He lures her in and signs them and then gets her number, because he’s going send her more swag for the kids. And he uses it to send her an inappropriate picture.”

VanCamp adds “it’s one of those things that I’m sure doctors and nurses deal with all the time, but it’s great this is at the forefront of the conversation right now, because things are on the cusp of changing. Which I think is great.”

The actress says it wasn’t the “most intense” story line for her to shoot, because “Nic is quite an empowered character, and she’s tough and sort of dealt with it on her own.” In fact, Nic is more irritated with her ex’s reaction to the incident.

Also Read: 'The Resident': Matt Czuchry on Why New Fox Series Could Be 'The Shield' of the Medical Genre

“I think more than anything, she was frustrated within that story line because Conrad, who always wants to be the hero, took matters into his own hands and created some problems when she had every plan to deal with it herself,” VanCamp said. “So actually, the tension comes between those two rather than the athlete and her. Because I think she just sort of deals with that guy, but when you want to deal with something on your own and someone else steps in it’s so frustrating.”