The trailer for the documentary “The Reunited States” comes amid a time of turmoil in the U.S. that has showcased the county’s political and racial divide.

The film, presented and executed produced by Meghan McCain and Van Jones, follows several subjects as they try to bridge that divide through communication and peace instead of violence and hate.

A description of the film reads:

At a time when America is ripping apart at the seams, “The Reunited States” is a powerful and urgent documentary that follows the unsung heroes on the difficult journey of bridging our political and racial divides. Susan Bro, who lost her daughter when a car drove through a group of counter-protestors in Charlottesville, and David and Erin Leaverton, a Republican couple who travel to all 50 states in an RV to find out what divides us, are just a few of the characters profiled in the film. Each of these bridge-builders have realized that while our divides run deeper than they ever could have imagined, so does the love and hope to bring our country back together. Based on the book of the same name, the film urges us to consider that everyone has a role to play in reuniting the country.

Watch the just-released trailer above.

One of the film’s subjects, Susan Bro, lost her 32-year-old daughter Heather Heyer when a car driven by white supremacist James Fields Jr. rammed into a group of protestors in Charlottesville, Va., during the 2017 Unite the Right rally. Other subjects include Independent politician Greg Orman, who faces an uphill battle earning constituents’ votes in his race to be governor of Kansas; Steven Olikara, who founded the Millennial Action Project and works tirelessly to build a coalition of bipartisan lawmakers to transform government; and the aforementioned Leaverton.

McCain is a co-host on “The View.” She is the daughter of the late Sen. John McCain and is married to Ben Domenech, the co-founder and publisher of The Federalist, a conservative online magazine.

Jones is a CNN commentator, author and the CEO of REFORM Alliance to advance criminal justice reform.

“As this election has shown, we’re still a nation deeply divided. What makes ‘The Reunited States’ so powerful is that it shows us what it means to ‘bridge the divide.’ It reminds us that we all have a role to play in reuniting the country,” said Jones.

“The Reunited States” will be available on Virtual Cinema Jan. 29 and on video on demand, Amazon and iTunes Feb. 9. Click here to learn more about the film. 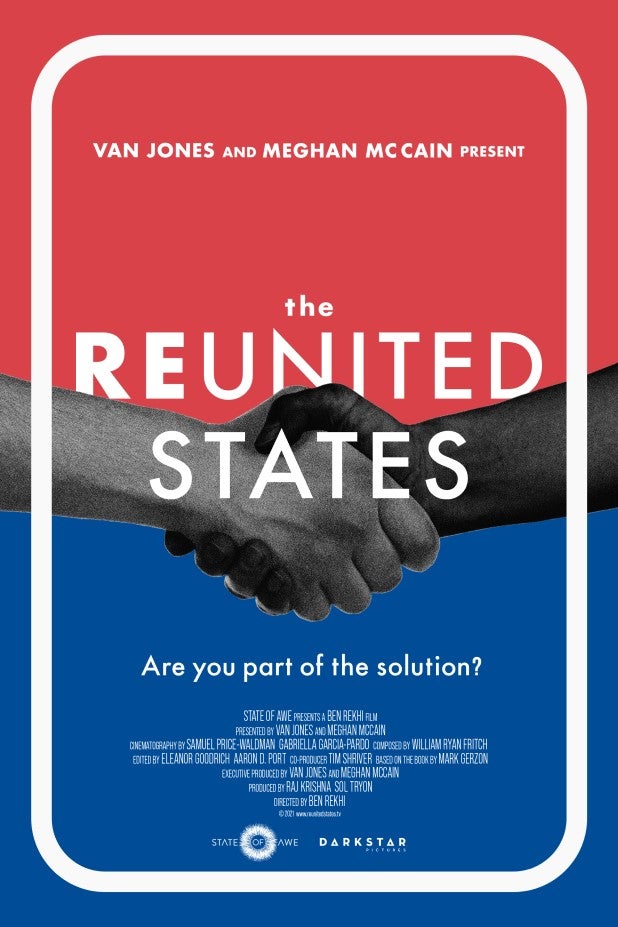