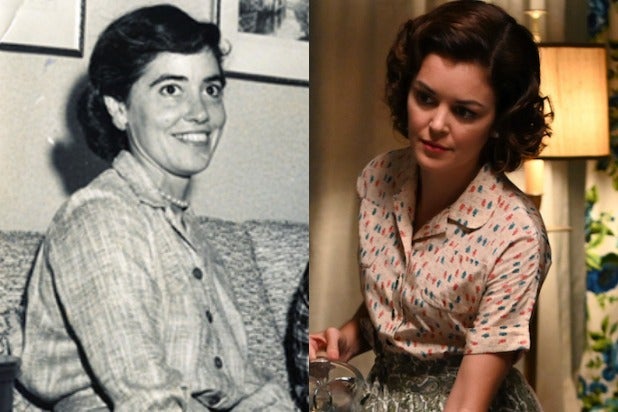 Yes, the real-life Annie Glenn did have a speech stutter, just as Nora Zehetner portrays her in new Disney+ limited series “The Right Stuff.” The wife of John Glenn, who was the first American in orbit, turned what could have been a hindrance into a lifetime of award-winning advocacy work for people with communication disorders and other disabilities.

Annie Glenn’s stutter was hereditary: Homer Castor, her father, also stuttered. The communication disorder would stay with Annie her whole life, but at age 53, she was able to greatly improve her speech via a three-week treatment course at Hollins Communications Research Institute in Roanoke, Virginia. Annie Glenn later became an adjunct professor at the Ohio State University’s speech pathology department.

Ohio State now bestows the “Annie Glenn Leadership Award” annually to a person who has displayed “innovative and inspirational work in speech/language pathology.”

In 1983, Annie Glenn received the first national award of the American Speech and Hearing Association. In 1987, the group began presenting an award named after Annie Glenn. James Earl Jones was the inaugural recipient for what he’s been able to achieve while having a severe stutter.

Annie Glenn was inducted into the National Stuttering Association Hall of Fame in 2004.

It’s not for this writer to say whether or not Zehetner performed Annie Glenn’s speech impairment particularly well, but it is handled well by the show in that it is not handled at all. Zehetner’s put-on stutter is perhaps not even noticeable at first and it is not discussed — at least not within the first couple of episodes that we got to watch early — which is precisely how those moments would play out in real life.

Also Read: Disney+ in October: 'Mandalorian' Season 2 and Everything Else New Coming

Annie Glenn died in May due to complications of COVID-19. She was 100.

The first two episodes of “The Right Stuff” debuted Friday on Disney+. The next six episodes will roll out weekly, one at a time.