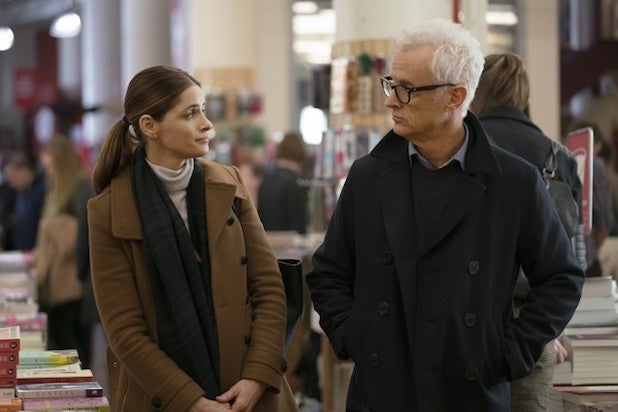 (Warning: This post contains spoilers for “The Romanoffs” Episode 104, “Expectation”)

Welp, “The Romanoffs” got us again.

Toward the end of “Expectation,” the fourth episode of Matthew Weiner’s new Amazon anthology series, Amanda Peet’s character, Julia, reveals her long-kept secret to her beloved husband, Eric (played Jon Tenney): his adult daughter, Ella, (now expecting her own baby) is not actually his child, but his best friend Daniel’s (played by John Slattery).

He accepts it, telling her he loves her and has known for years and he loves Ella and everything is fine.

Also Read: Wait, Who Are the Romanoffs Again?

Except that was all just a fantasy Julia made up in her head, and she went on with her normal life, heading to dinner with Eric and her daughter’s in-laws while they await the birth of their first grandchild.

Now, if you were fooled by that dream sequence, don’t be ashamed. “The Romanoffs” has already been packed with plenty of twists and turns and star Peet told TheWrap in an interview last week this one was no different. In fact, she thinks it wasn’t really obvious at all.

“I think it works as a fake-out,” Peet said. “I don’t think it’s so obvious, so you don’t question it. If it were completely obvious then it wouldn’t work as a fake-out. I think it’s just this lovely wish fulfillment, fantasy she has.”

But that isn’t where the episode ends, as while at dinner with her son-in-law’s parents, she collapses from the pain she’s been struggling with the whole day and we learn what the problem has been: gallstones. She lands herself in the hospital, needing to stay overnight so she can have surgery. Eric and Ella are there to make sure she gets the care she needs, though Eric leaves to grab some things so he can be at her side.

And that’s when we find out that, though Julia may have been unable to reveal her secret to Eric, she can now share it with her daughter, as Ella reaches for her mother’s phone so she can call Daniel — who Julia is obviously still in love with.

Peet is a big fan of this ending — the real one.

“I think it’s really beautiful,” Peet said. “I think the moment that a child sees their parent as a real human being, and flawed is really difficult to capture. And I wonder if it often happens around a grandchild’s birth. Becoming a mother yourself makes you rethink your perspective on your own mother.”

New episodes of “The Romanoffs” drop Fridays on Amazon.