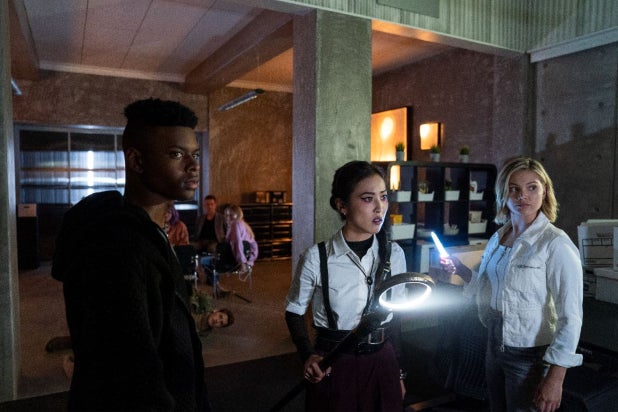 Marvel TV fans mourning the end of Freeform’s “Cloak & Dagger” got to see Tandy (Olivia Holt) and Ty (Aubrey Joseph) one more time during the final season of “Runaways.”

“It was actually something that we had wanted to do from the beginning,” Joshua Schwartz, who serves as showrunner alongside Stephanie Savage, told TheWrap. “‘Cloak & Dagger’ and ‘Runaways’ are so tied together in the comics. We always felt like it would be a really natural storyline to have them come visit LA, as they do in the comic.”

The duo appears at the very end of the seventh episode, following Nico’s (Lyrica Okano) attempt to return to the Dark Dimension to recuse Alex (Rhenzy Feliz). They nearly come to blows when Nico suspects them to be henchman for Morgan le Fey (Elizabeth Hurley), a sorceress who came from the Dark Dimension.

Also Read: How 'Runaways' Got Caught in the Middle of Marvel TV's Corporate Restructuring

However, Ty aka Cloak, tells her that they only traveled to the Runaways hideout because of Nico’s tampering with the Dark Dimension, which “Cloak & Dagger” fans would know by another name: The Loa Dimension. It’s the place that allows Ty to teleport, which he also at times used to trap someone in.

Savage said the getting Cloak & Dagger into the show served dual purposes. Not only do Ty and Tandy assist the Runaways in rescuing Alex — including a neat trick involving Nico mixing her magical powers with Tandy’s glowing white daggers — but they’re arrival serves as proof to the Runaways that there are other kids just like them.

“It’s a huge moment for our kids to realize there are other teens how have powers,” Savage said. “That idea of feeling less alone, and knowing that there are other kids out there going through the same thing, felt like a really important story to tell… Our characters don’t get that much opportunity to interact with people the same age that they are, because of their situation.”

Most crossovers involve two shows on the same network. But with “Cloak & Dagger” airing in a weekly format on cable network Freeform, and “Runaways” streaming all-at-once on Hulu, that added an extra layer of difficulty.

“Because of the different networks, and what have you, it becomes a little more complicated,” said Schwartz. “And then when everything started to go under one roof at Disney, there was an opportunity to do that for Season 3. We had reached out to [“Cloak & Dagger” showrunner] Joe Pokaski, made sure he was good with it. It all felt like, if you were a fan of the ‘Cloak & Dagger’ TV show, you would recognize the characters.”

Though the end of the episode the two sides mention that, just maybe, they’ll meet up again, fans of both shows know that’s not true. “Cloak & Dagger” was canceled by Freeform earlier this year and “Runaways” are in their own swan song.