“I’ve been anticipating this movie for a while,” Ere, an assumed name for her unique line of work, told us on Thursday. “The shape, the character design are gorgeous — and I love [Guillermo] del Toro’s work.”

The best part for a small business like theirs? The two-person team already had a mold that would work perfectly. Previously called “The Prince,” (no, not after the late singer, though the “Raspberry Beret” musician certainly inspired some sex toy play himself, may God rest his soul) the model boasts “ruffled, gill-like” ridges and a “wave” shape. Oh, it also has four piercings — a Prince Albert and a Jacob’s Ladder (if you know what those are). You go, Amphibian Man.

To adapt it for fans of the latest del Toro flick, Ere just had to do some color-matching. Remixed in blues and greens and blacks and re-titled “The Jewel of the Amazon,” the Asset toy sold out its original run of 20 in two days, Ere told TheWrap. That netted them about $2,000.

We’ll break those economics down for our readers. A non-custom “Shape of Water”-inspired toy runs $70 for a “medium” and $50 for a “small.” XenoCat customers can tack on $20 more for custom elements — like a different firmness, for example.

Each toy contains body safe pigments and can be boiled to clean. They’re all handmade, and take about two and-a-half hours to create. See the finished product here: 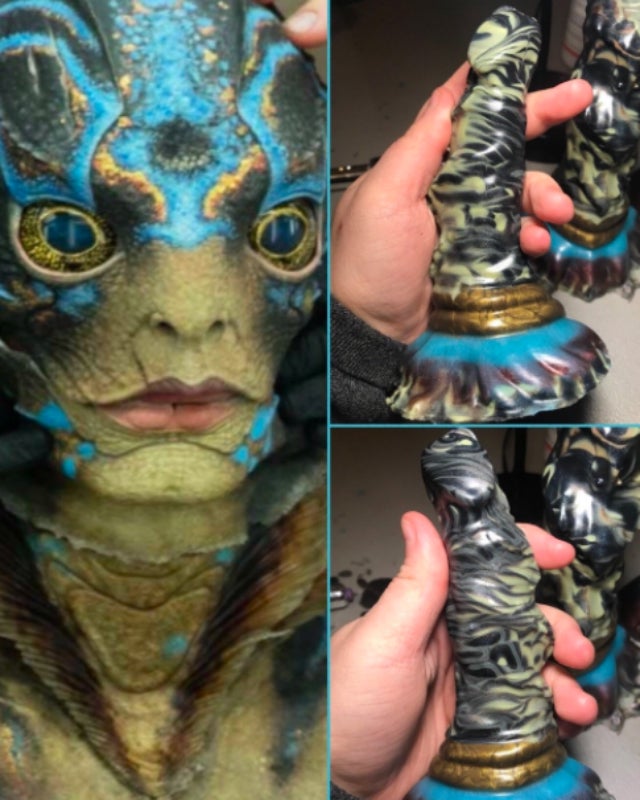 Due to popular demand, Ere and Ink plan to make another limited run of 20 and post them to Etsy in time for next month’s Academy Awards. Yes, this is their full-time job.

While she’s “got plans” for more movie and video game-inspired toys (maybe “Monster Hunter,” definitely not “Jurassic Park”) Ere’s also got her sights set on going Hollywood in another way.

A part-time prop-maker — she made a chest plate for a “Resident Evil” character — Ere would love to create masks and prosthetics on the side for movie sets, or for theater like Cirque de Soleil. But don’t worry, loyal XenoCat customers, her true joy will always lie in giving you pleasure.