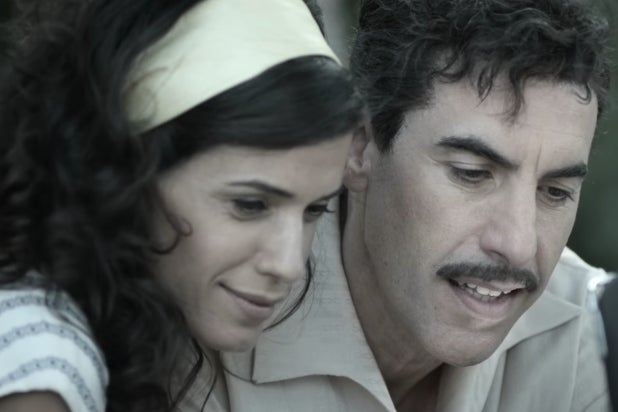 Sacha Baron Cohen-led limited series “The Spy” — which comes out today on Netflix — tells the true story of how famed Israeli Mossad agent Eli Cohen went undercover in 1960s Syria. But it also dives into the tragic love story between Cohen and his wife Nadia, to whom he is forced to lie to maintain his cover.

Creator Gideon Raff, whose Israeli television series “Prisoners of War” was the basis for Showtime-drama “Homeland,” says his goal for “The Spy” was to leave the politics to the politicians and instead put the spotlight on the deep emotional struggle that came with Cohen’s sacrifices.

“In the middle of this thing is a huge, huge love story,” Raff told TheWrap. “I think Eli really thought that by living in Damascus and spying for Israel, he was protecting his wife and his children.”

In “The Spy,” Cohen’s wife Nadia is played by Hadar Ratzon Rotem, who also starred in Raff’s “Prisoners of War.”

“You know, in the last letter Eli writes to his family, the real letter — it’s heartbreaking, because he writes to [Nadia], ‘Of course be sad a little bit, but then remarry so that the kids have a father and you have a partner.’ And she never did,” Raff said.

As part of his research into the series, Raff spoke to the real-life Nadia, who is still working to have her husband’s remains brought back to Israel from Syria 55 years after his death. He also spent time with two of their children, Sophie and Shai.

“She’s been fighting for his return all these years,” he said. “That idea of your father, your husband, being put on a pedestal, but you just want to a hug your father who is not there anymore — it was very moving.”

Raff also described witnessing Sacha Baron Cohen transform into Eli Cohen in a way we’ve never seen him do for any other role.

“Everyday we were looking at Sacha Baron Cohen naked for the first time in front of the camera, without a larger than life character,” he said. “I would not let him add comedy to this role, because I thought we should just commit to who [Eli] is and not worry about what usually [Sacha] is perceived as,” he said.

“The Spy” is full of suspense, and Raff makes us acutely aware that every moment could be Cohen’s last as his Syrian alter ego, Kamel Amin Thabet.

“It’s the minutia of real spying — it’s crossing the border when you know that the suitcase has the transmitter and everything that Eli actually did have,” Raff said. “It’s not having the privilege of shooting somebody and just moving on, like James Bond.”