A version of this story about “The Staircase” showrunners Antonio Campos and Maggie Cohn first appeared in the Limited Series / Movies issue of TheWrap magazine.

Like many of us, when Antonio Campos first watched the 2004 docuseries “The Staircase,” he was riveted. Directed by the French filmmaker Jean-Xavier de Lestrade, the Peabody-winning documentary chronicled the murder trial of Michael Peterson, a fiction writer who was convicted in 2003 of killing his wife, Kathleen, after she was found at the bottom of the stairs in their house in Durham, North Carolina.

Now a true-crime classic, the series was groundbreaking because of its unprecedented access: For two years, de Lestrade’s team filmed Peterson, his family and his lawyers at home and in the courtroom, collecting material for the first eight episodes, which eventually grew to 13 (all of which are now on Netflix). The story unfolded with stunning twists, and through it all, Peterson claimed that Kathleen fell on the stairs. (He eventually took an Alford plea, which allowed him to plead guilty while maintaining his innocence.)

“To immerse myself in a (true crime) story for eight hours straight was something that I had never experienced before,” said Campos. “Michael Peterson is this maze of a character and the maze of a story felt really great for a (dramatic adaptation).” He continued to follow the case, and when it was retried in 2011, he attended the trial. (You can even spot him in episode nine of the docuseries.) “The story continued to evolve, and at some point it just became a part of my life.”

Executive producer Maggie Cohn had a similar reaction to de Lestrade’s series. “Like Antonio, I’d never seen a documentary in this shape before. You had “Shoah,” which is six hours long, but it isn’t episodic,” she said. “Because it was episodic, the structure really lent itself to narrative storytelling, which I thought was a bit of a self-reflexive choice. Years later … when I got the pilot that Antonio had written, I was like, ‘Oh my gosh! Of course — ‘The Staircase’!” 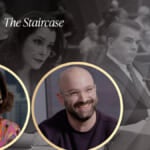 Also Read:
‘The Staircase’ Creator Explains Why the Series Wasn’t an Attempt to ‘Indict or Exonerate’ Michael Peterson | Wrap Video

The result of their years-long fascination is HBO Max’s eight-part miniseries, also called “The Staircase,” that stars Colin Firth as Michael and Toni Collette as Kathleen, as seen in the final months of her life. The original documentary team are also characters, adding a meta layer to the multi-timeline narrative that questions the nature of truth and even storytelling itself. Vincent Vermignon plays de Lestrade and Juliette Binoche is Sophie Brunet, the editor who became romantically involved with Michael.

In a recent Zoom call, Campos and Cohn talked about wrapping their heads around such a slippery saga. (Warning: Spoilers ahead.)

How did you decide to turn de Lestrade and his team into characters in your miniseries?

ANTONIO CAMPOS The first incarnation of this was a feature, and it was from the perspective of the filmmakers. It always struck me: There was a film crew there this entire time. That’s crazy. They were embedded with this family for two years. And the feeling of two French filmmakers in Durham, North Carolina, during the time of Freedom Fries was a nice contrast. What got me really excited when I met them was, these guys (de Lestrade and producer Denis Poncet) feel very differently about the case. It felt like the filmmakers were a Greek chorus for us, (verbalizing) those debates about Michael Peterson and the evidence that we were all having in our homes or in our heads.

MAGGIE COHN It was particularly evident how convenient the documentary team was in Episode 4, where we are showing the construction of the documentary — that then showed the construction of the defense and the prosecution telling their stories. They’re constructing a story about two stories that are being told, and we’re making a story about all of those stories. We are also asking the viewer to be as critical as those documentarians are about the story that we are giving you.

Colin Firth captures the loquacious, performative side of Michael Peterson that we see in the docuseries as well as his twitchy energy — and anger. It’s a different side of Firth than what we’re used to.

CAMPOS Yeah, it was a wonderful performance to watch on set, always surprising to see where Colin was going to go. Colin’s a brilliant actor and we’ve seen different colors and so many different performances, but there’s a darkness here and complexity to Michael Peterson — there’s an aspect of him that’s kind of unlikable and impenetrable. It was a challenge of a character to embody, and Colin, I mean, we marveled at that performance every day. It was amazing to watch.

You were given access to Jean-Xavier de Lestrade’s “Staircase” archive. Did you come across anything that surprised you?

COHN You showed us a couple things and I think what is problematic maybe about discussing them is that, like everything, you can view it and then you imbue that with what you believe. I’m not trying to be vague. And I’m also trying to simultaneously remind Antonio of what the thing is without saying it. (Laughs) It involves a glance.

CAMPOS Yeah, there were definitely moments where you would catch a glance of someone and it felt like exactly what Maggie’s saying. It was like, oh, is that …? Is there something in there? Like, is that glance loaded? Is it someone saying, “Hey, don’t talk about that.” Or is it just a glance? There was also a sequence that was warm with Michael Peterson where he’s he’s giving advice to a gardener that used to work for him that started to write. And he’s being very generous with this time and supportive and encouraging. That was another side of Michael Peterson that you hadn’t seen. 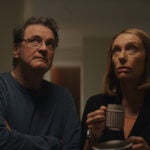 Also Read:
‘The Staircase’ Exec Producers Respond to Criticism: ‘Nothing But a Deep Respect’ for Original Docuseries

Your series gives voice to Kathleen. How did you go about creating her character?

CAMPOS From the very beginning, it was always, “Let’s create the most dynamic, complicated, interesting version of Kathleen.” We used all the material that we could find, all the research we could find about her and started to construct our version of her. We wanted to understand how that person in September of 2001 gets to the bottom of the stairs at the beginning of December. We set about injecting her with humor, energy, pain, frustration — all of the things that we felt like Kathleen was really going through at the time. And then we got Toni Colette. We had written this character that was very complex and dynamic, and then got the exact right person to bring her to life.

COHN This is a very divisive case and everyone has opinions on it, but the one thing that was universally agreed upon was how incredible Kathleen was. And to have a (character in) your story that brings everybody together when it’s actually a story about people being torn apart, you then can highlight that contrast. In order to fully understand what was lost, you have to understand the woman. She was only defined by absence, so filling that void was essential.

Right. She exists for most of us as a photograph.

CAMPOS Yeah. And she’s there’s in home videos, but there’s barely a word that we could get on camera. It’s so tragic. You get the sense of this very dynamic and fun and interesting person, but you don’t get to hear her speak. In some ways I think that was very liberating for Toni Colette, because it gave her a lot of room to explore and create and not feel bound to sound exactly like Kathleen, because we didn’t have a reference for how she sounded. We just had a reference for how she felt.

Let’s talk about Kathleen’s death scenes. (The series depicts three possible scenarios: an accidental fall, an attack by an owl and a murder by Michael.) In the murder scenario, she discovers evidence that Michael has been meeting up with male escorts behind her back and confronts him in the kitchen. How did you develop the conversation that ends with him beating her head on the stairs?

CAMPOS It took a lot of talking to figure out: What is it that she says that can trigger him? It had to speak to something deep, deep, deep down in him. And one of the things we have been talking about throughout was his trauma and pain as a child. She’s calling him out and challenging him in a way that maybe he’s never been before. That trajectory from the kitchen to the stairs, that energy had to carry so that when he turned and pushed her down the stairs and beat her, you believe it because you could feel the rage that was building in him.

In the final episode, there is an interview scene where de Lestrade asks Michael if he killed Kathleen. He replies cryptically, “Kathleen’s death was an accident.” That isn’t in the docuseries, is it?

COHN It’s two things at once.