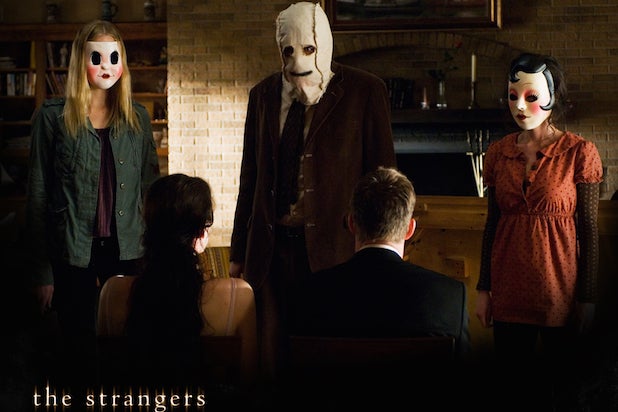 After several years in development, “The Strangers 2” is finally moving forward, as Marcel Langenegger is in negotiations to direct the sequel this spring, TheWrap has learned.

Relativity and representatives for Langenegger did not immediately respond to requests for comment.

Ben Ketai (“Chosen”) is the newest writer on the sequel, which follows a family on the verge of sending their troubled teenage daughter to boarding school as they embark on one last family trip to a mobile home park that their uncle runs. Their last bonding opportunity turns to horror when the teenage children discover the bodies of their aunt and uncle, fresh from a recent visit from the Strangers — Man in the Mask, Pin Up Girl and Dollface.

The night becomes a race to escape for the family, as the masked killers take new pleasure in tormenting their victims in this twisted sequel that picks up where the original’s bloody footprints leave off.

Roy Lee, Doug Davison, Nathan Kahane and Trevor Macy are returning to produce, while Sonny Mallhi, Marc Evans and Joe Drake will executive produce. The film will be produced by Vertigo and Good Universe.

Thanks to a terrific trailer, “The Strangers” was a sleeper hit back in 2008, grossing $82 million worldwide on a reported production budget of $9 million. Bryan Bertino directed the original Rogue Pictures release, which starred Liv Tyler, Scott Speedman and Glenn Howerton.

The Swiss filmmaker has been developing the sea-bound thriller “Latitude” with Relativity as well as “Silver or Lead” with Cross Creek Pictures. He’s represented by CAA and attorney Carlos K. Goodman.

Ketai is repped by APA and Circle of Confusion.