Body by empanadas. John Cena said James Gunn made him eat 40 of the pastries in “one big take” while dressed as Peacemaker for “The Suicide Squad.” The WWE all-timer then shared a photo — by way of Jimmy Fallon’s “Tonight Show” — of him struggling with empanada No. 37.

Think of the abs!

First up though during their Monday virtual hang, Fallon (understandably) geeks out over Cena’s full Peacemaker gear. It’s pretty rad — and worthy of Cena’s own spinoff series on HBO Max.

Peacemaker’s trailer leaves a little something to be desired.

On to the photo, which Cena knows is almost sure to become a meme (and is posted at the bottom of this story).

“That, right there, is the face of defeat,” Cena said. “We had to do this one, big take because the horribly beautiful corrupted mind of James Gunn operates in so many intricate pieces.”

“I nearly ate myself sick,” he continued. “That was my most difficult stunt in ‘The Suicide Squad.'”

Fallon then asked Cena if he’ll “be back” to WWE.

“Yeah, I will,” Cena said. “I just, unfortunately, the state of the world– I’m not sitting there on the couch next to you. It’s a difficult and unpredictable time. And right now, I’m doing this, I’m filming ‘Peacemaker.’ And that’s gonna take a lot of my time and I can’t bounce back and forth due to international restrictions.”

“So, at least for the time being, I’m here and I’m still away from WWE but I very much look forward to returning as soon as I possibly can,” he concluded.

Cena and Fallon then had some fun while shamelessly plugging the 16-time world champion’s new Super Bowl spot, this one for what sounds like a horrible new Mountain Dew flavor, Major Melon. 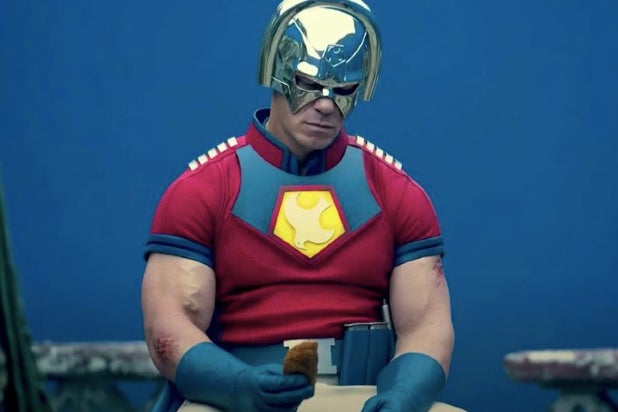 Warner Bros. movie “The Suicide Squad” is set to be released in theaters and on WarnerMedia’s streaming platform HBO Max on Aug. 6, 2021. The “Peacemaker” series does not yet have a release date, but it is expected to debut this year.