“The Summer I Turned Pretty” has expanded its cast for Season 2, adding Kyra Sedgwick and Elsie Fisher.

The two join the Prime Video show in recurring roles, however no details were made available about their characters. Season 2 is currently in production.

Based on the book of the same name by author Jenny Han, Season 1 of “The Summer I Turned Pretty” debuted on the streaming service earlier this year, going on to become the No. 1 show on Prime Video during its premiere weekend.

Fisher is coming off a role in the latest season of HBO’s “Barry” while Sedgwick most recently starred in the ABC sitcom “Call Your Mother,” which was canceled in 2021 after one season.

Season 2 is being led by showrunners Han and Sarah Kucserka and continues to adapt Han’s book trilogy, which continues with “It’s Not Summer Without You” and “We’ll Always Have Summer.” 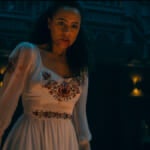 The series is centered around a love triangle between “one girl and two brothers, the ever-evolving relationship between mothers and their children, and the enduring power of strong female friendships. It is a coming-of-age story about first love, first heartbreak, and the magic of that one perfect summer,” per Prime Video.

Fisher is repped by Abby Bluestone at Innovative Artists.