Amid the glut of superhero films hitting theaters from both Marvel and DC, not to mention each studio’s numerous television productions, is there room for something like Amazon’s new series “The Tick?”

According to character creator and series executive producer Ben Edlund, a show like “The Tick” is more appropriate now than ever, thanks in part to this superhero saturation.

“The Tick” has hit the small screen twice before: first in a three-season animated series starting in 1994, and then in a short-lived but beloved live-action show in 2001 starring Patrick Warburton. However, Edlund feels like audiences (and of course Amazon and Sony, the studios backing it) are ready again.

“The culture was exploding with superhero expression and saturating itself with this manic obsession, so it seemed like the audience couldn’t have been better educated for the norms of superhero stuff,” Edlund told TheWrap. “My feeling is that the Tick always grabs up the stuff of the time and makes a suit out of it.”

The character of the Tick was created by Edlund back in the 1980s when he first drew the gag character for the New England Comics newsletter, a comic book chain based in Massachusetts. Soon the big blue guy started getting his own comic panels in the newsletter and eventually, his own book.

The Tick is a parody of superhero archetypes. The original character, depicted in the first issue of the comics, escaped from a mental hospital. Edlund said he created him during the Black-and-White Boom and Bust of the 1980s, in which independent comics publishers sought to print massive amounts of cheap knockoff stories, causing an over-saturation in the industry that caused a bubble to burst.

Despite the eventual market crash, the 1980s created a moment for satirical but genuine characters such as the Teenage Mutant Ninja Turtles. In this context, the Tick fit in. This was in part thanks to the introduction of Arthur, the Tick’s sidekick, starting in later issues. He’s a much smaller, less in-shape accountant without superpowers who possesses a super suit that allows him to fight crime. The rapport between the two — the idiotic mania of the Tick and the grounded strategy of Arthur — keeps the story relatable despite any zaniness that occurs around them.

In 2001, during the run of the first live action show, the Tick fit in as well, just in a different way. This was around the premiere of the first “X-Men” movie, just before the first “Spider-Man,” and what would eventually become the modern resurgence of superhero movies. This was, in turn, a product of a boom in comic-based cartoons in the 1990s that proved there was still an audience for superheroes. The Tick here was a little edgier, using curse words in dealing with enemies, but still managed to be mostly a parody of the do-good figures of traditional comics.

The new Tick (played by Peter Serafinowicz) isn’t too different from its predecessors. In both the 2001 show and the new one on Amazon, the Tick is a large man in a blue suit who is nearly indestructible and super strong. He believes in ideals like truth and justice, but lacks the skill to read social cues, and a long-term memory that would make him an otherwise productive member of society. 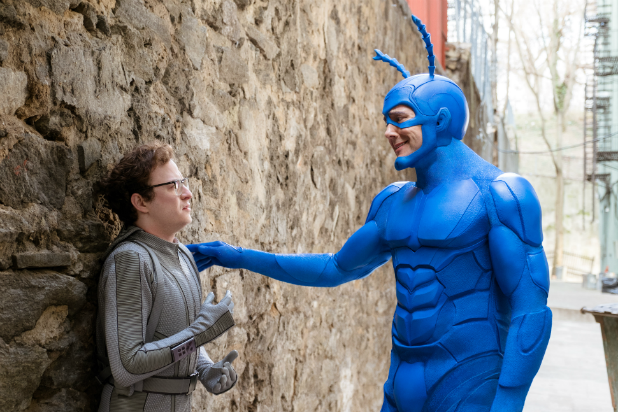 However, the show around him has changed. This iteration of “The Tick” is darker — both in production palette and in tone — and is more serialized. As Edlund points out, there is more violence and more superhero action sequences, which he admits is a response to contemporary superhero titles.

“[The modern superhero movie] tends to have a rainy day quality in it, a lot of angst,” he said, comparing some of the recent DC films to “a teen alone in a bathroom crying under a sink about the unfairness of the universe” (don’t worry, he’s been there). “I think we’re buried in superheroes and there’s a build up of angst among them.”

Griffin Newman, who plays Arthur (and who is the actual main character) agrees.

“So much of superhero pop culture feels post-postmodern,” he told TheWrap. “It’s so concerned with deconstructing the tropes or throwing everything off the hump or subverting because they’re afraid that people are tired of the traditional.”

But the Tick himself hasn’t changed because not only is he flexible, but he’s what superhero stories could get more of, according to Newman and Edlund. You can see it in Serifanowicz’ depiction of the hero. Despite all the changes made to the show and the dynamic nature of the superhero genre, he’s very familiar. You get his deal right away.

“It gets back to a much more sincere kind of superhero storytelling,” Newman said. “He’s such a pure character. He’s such a positive dude that cares about people and justice… I find it reassuring in a show that’s taking the piss out of a lot of superhero pop culture that the Tick doesn’t have an internal conflict about what he wants to do.”

Also Read: 11 TV Shows You Forgot Were Based on Comic Books (Photos)

So yes, the creators and stars of “The Tick” are responding to the influx of superhero and comic movies and shows by creating another. There is some relief here for people who are exhausted by certain qualities of modern superhero storytelling.

“We’re the only superhero TV show that isn’t connected to anything else,” Newman said, referencing things like the Marvel Cinematic Universe’s scale as being a deterrent for some moviegoers. “We’re just kind of telling one pure story. It’s its own mythology.”

Edlund has gone on to a successful TV career, writing and producing for shows like “Angel,” “Gotham” and “Supernatural.” So is there a reason he keeps coming back to the Tick, a character he made when he wasn’t too far removed from high school?

“It’s fascinating that we’re expressing ourselves in superheroes as readily and pervasively as we are,” he wondered. “On the show we’re doing, this is the first season and we’re just beginning this discussion… We’re grappling with our own emerging godhood in terms of our capacities with an evolving sense of self that for some reason keeps wanting to wear a cape in the mainstream. Very curious, you know.”

25 One-Season Shows You Need to Watch, From 'The Get Down' to 'High Fidelity' (Photos)

Not every show can get the full run it deserves

It's always a letdown when shows don't get to shine. Even worse is when a series shows so much potential but gets canceled after only one season. Many of them go on to become cult classics, but we still have to wonder what could've happened if they went on for longer. C'est la vie.