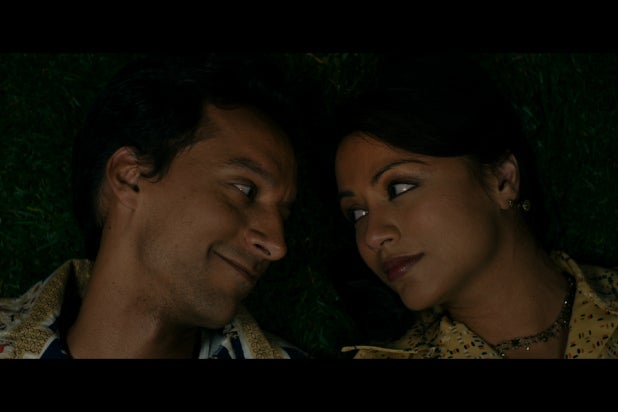 In the most piercing scene of “The Tiger Hunter,” a half-dozen Indian immigrants who share a Chicago apartment explain how each makes a living. Like protagonist Sami (Danny Pudi, “Community”), nearly all of those men was trained as an engineer. But in America, one drives a cab. Another walks dogs. A third washes dishes.

Sami’s introduction to his new roommates is played for laughs. His new friend, Babu (an agreeably hammy Rizwan Manji, “Schitt’s Creek”), claims to work as a “wallet” (he means “valet”) — a joke that plays on some Indian Americans’ muddle between the letters V and W, as well as the English language’s often chaotic pronunciation rules. Still, a stab comes through the fluff: America can make a nobody out of anybody.

Directed and co-written by first-timer Lena Khan, this feel-good, immigrants-get-the-job-done dramedy is stodgy in its “do X in time for Y to get the girl” structure. (To fill those variables in, Sami needs to get hired as an engineer to prove to the forbidding father of his childhood sweetheart Ruby (Karen David) that he’s worthy of her hand in marriage.)

Set in a groovy 1979, the film is seldom laugh-out-loud funny. But there’s enough good-naturedness and cultural specificity here, alongside a slight deviation from the usual immigrant narratives, to render it a dollop of sweetness and novelty that goes down easy.

“The Tiger Hunter” takes its name from Sami’s father’s profession. The engineer’s desire to do something as grand as his father did doesn’t add much to his characterization, but it does ground this coming-to-America tale in the fact that the places we immigrants come from boast their own splendor, too. To emphasize that point, Khan bathes the early village scenes in color and otherworldly light.

Sami and his roommates can only want what they see: fruit-colored cars as long as logs, middle-class jobs in line with their technical knowledge, easygoing friendships based on burgers and baseball. The engineering job Sami anticipated in the U.S. disappears before he even arrives, and so he ends up a draftsman, wondering how he can move up from the basement before his month in America is up and he’s forced to return home. In addition to the sitcom-obsessed Babu, Sami finds an (actually helpful) guide to American culture in his co-worker Alex (Jon Heder), who has his own reasons for feeling like an outcast within the tech company.

Microwave Innovator falls a bit short in the excitement department compared to Tiger Hunter, but that’s the mission Sami takes on to argue his case for a promotion. Since the film’s conclusion is predestined, it’s a bit disappointing that neither Khan nor Pudi give the naive Sami much of a personality beyond “determined” and “hardworking.” A master of the chatty deadpan, Pudi is fine but forgettable as a lead, save for the watery Indian accent he’s forced to sport throughout.

All Sami and his friends want is to grab a piece of America for themselves, but the relaxed hang-out scenes between him, Babu, and Alex are so genial that I wish we could spend more time in that crowded apartment. Babu serves samosas — his father’s recipe — and the immigrants finally get to enjoy their own history instead of constantly contorting themselves into the small spaces America grudgingly makes for them.

Within their cramped but homey environs, they can repeat to one other with conviction the honeyed welcome Mary Tyler Moore gave these immigrants: “You’re gonna make it after all.”