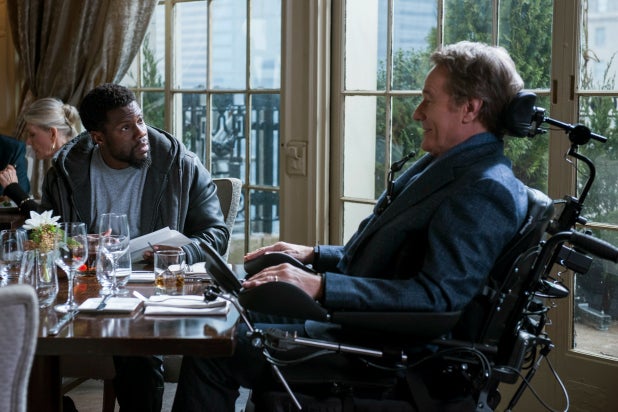 “The Upside,” the American remake of “The Intouchables” starring Bryan Cranston, Kevin Hart and Nicole Kidman, opened to $1.1 million in Thursday box office previews on 2,460 screens.

The strong number for a January release puts it ahead of Thursday preview numbers for several other recent family comedies, including Mark Wahlberg’s recent “Instant Family,” which brought in $550,000 in an admittedly more crowded holiday release season.

The film from director Neil Burger and released by STXfilms is projected to bring in $10 million this weekend from approximately 3,080 screens with the hope that strong word of mouth might make for a surprise hit in the early weeks of January, but it does hold just a 34 percent on Rotten Tomatoes.

By comparison, the similar 2014 dramedy “St. Vincent” starring Bill Murray and Melissa McCarthy opened to $7.7 million and went on to gross $44 million domestically.

“The Upside” is based on a true story and follows the unlikely friendship between a wealthy quadriplegic (Cranston) and an ex-con (Hart) who is hired as his caregiver. The film was originally meant to open in March 2018 but was delayed as part of The Weinstein Company’s bankruptcy. It is now being distributed by STXfilms along with the TWC offshoot Lantern Entertainment. It currently has a 40 percent on Rotten Tomatoes.

“The Upside” opens opposite holiday releases still holding over, including the Ruth Bader Ginsburg biopic “On the Basis of Sex” opening in wider release.

“A Dog’s Way Home” earned $535,000 from Thursday night previews starting at 5 PM from 2,657. The film stars Ashley Judd and Edward James Olmos in the story of a dog who goes on a 400-mile journey to reunite with its owner. Releasing on 3,090 screens, the film is projected for a $9-10 million opening against a reported $18 million budget. The film has a 71 percent score on Rotten Tomatoes.

“Replicas” stars Reeves as a synthetic biologist who loses his family in a car accident and rebels against both the government and scientific ethics with a desperate experiment to recreate them. The film is projected for a $4-7 million opening and has just an 11 percent on Rotten Tomatoes.