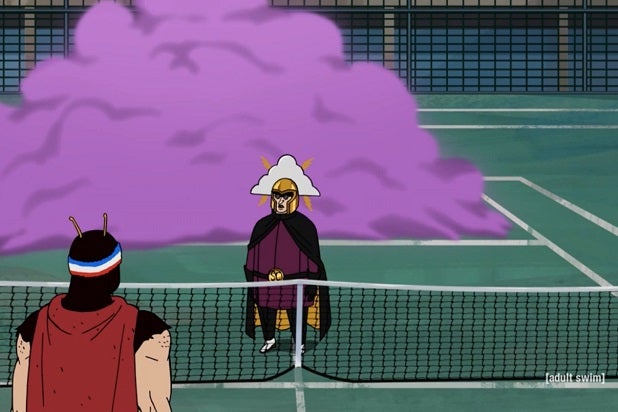 The episodes of “The Venture Bros.” that always seem the most ridiculous are the ones that could probably be called the most meaningful.

Take “The Bellicose Proxy,” in which the show once again dives deep into the idea of a highly regulated bureaucracy of secret agents, supervillains, mitigated collateral damage and a whole lot of rules — and actually manages to offer up a vision of a world working in a way you can’t help but wish the real world did.

The episode finds Augustus St. Cloud (Christopher McCulloch) about to begin officially “arching” his nemeses, Billy Quizboy (Doc Hammer) and the Pink Pilgrim AKA Pete White (McCulloch) — they’ve fought before, but now it’s sanctioned by the organizations that oversee superhero and supervillain conflicts. All the while, Dr. Mrs. The Monarch (Hammer) helps turn a double agent, by promising to help him reconcile with his estranged girlfriend, and actually follows through on that promise. And Billy and Pink must prepare for the coming battle despite being utterly terrified.

The last few seasons have really been digging into the nitty-gritty of how a universe full of costumed heroes and villains actually works without the entire world falling apart. One key idea is that everyone involved wants to engage in “organized hatred,” but nobody wants to show up at their next battle only to get vaporized by a ray gun that’s well outside their capability to deal with.

Several groups exist to keep things organized — including Office of Secret Intelligence (O.S.I.) for heroes (“protagonists” is the official terminology) and the Guild of Calamitous Intent for villains (“antagonists”) — so villains and their heroes don’t greatly out-match each other. It’s a world of heroes and villains that respects people’s time, respects the rules, and understands its place in society.

These concepts are usually played for laughs, making fun of comics and movie tropes by injecting banal reality into them. Workplace interpersonal conflicts and awkward romantic and sexual disappointments often impact things far more than the most fantastic super science. But though “Venture Bros.” skewers the idea of superheroes and villains at its core, it still imagines a kinder, gentler world through costumed aggression.

Even the scariest villains are relatively cordial and mostly in it for the performance of the battle of good against evil, rather than the actual, uh, evil. And the show is constantly tussling with themes of masculinity and failure, and in a major way, the existence of the Guild and O.S.I. provides an outlet for what would otherwise be a toxic cycle of hatred, violence and greed.

And a major theme is how that theatrical push-pull actually helps people of “The Venture Bros.”

For example, in “The Bellicose Proxy,” we discover that the Guild even has a mentorship program similar to Big Brothers and Sisters, called “Big Villains.” This program matches St. Cloud, who is currently a level one villain, the guild’s lowest rank, with a pair of mentors: The Mighty Monarch (McCulloch) and 21 (Hammer). Meanwhile, Rusty Venture (James Urbaniak) and Brock Samson (Patrick Warburton) similarly offer advice and training to Billy and Pete.

Monarch and 21 have selfish reasons — joining Big Villains will help them rise through Guild levels (they’re currently a graded-on-a-huge-curve five), and put them closer to once again being able to officially arch Monarch’s chosen nemesis, Rusty. It also allows Monarch to arch Rusty by proxy, since St. Cloud’s nemeses happen to live with him. But they also do a lot in the Big Villain program to help St. Cloud be cooler. A cool villain helps make for cool heroes.

The best and most important line in “The Bellicose Proxy,” also the last one, sums it all up. Rusty watches Billy and Pete regale Hank (McCulloch) and Dean (Michael Sinterniklaas) with the stories of their triumph over St. Cloud. Unfortunately, the epic battle was actually just a nitrous-induced hallucination. But then Brock asks if Rusty will ever tell Billy and Pete the truth.

Because these guys need a win sometimes — even if it’s a fake, costumed one. Having a nemesis, even one as bumbling and ostensibly minor as St. Cloud, gives both a sense of purpose and by the end of the episode, heroism.

Billy and Pete’s company, Conjectural Technologies, has failure and scamming built into the name — neither of them has ever been able to really get their lives together. And St. Cloud similarly is implied to be a lonely, angry nerd. But all three gain something from their arching; the sense that somebody, somewhere, cares enough to put on a costume and shake their fist at the sky, just because they’re thinking about you. And for all the complaining characters like Rusty do about their world, even he gets how much better, and easier it is to deal with villainy that respects the rules, and aren’t always so bad. If only for the self esteem.

Compared to the free-range, unstructured villainy by both heroes and villains of the real world, where people are largely hurt by callous greed, indifference, or straight malice, the supervillains of “The Venture Bros.” are positively altruistic.

Or put another way: even The Mighty Monarch wouldn’t jack up the price of cancer medication 500%.