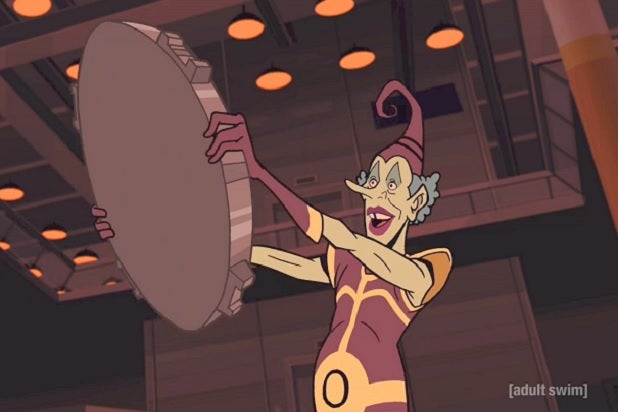 (Note: This post contains spoilers for the Sept. 16 episode of “The Venture Bros.”)

Adult Swim’s “The Venture Bros.” loves to slip in extended gags and references to beloved cartoons and movies — and sometimes they’re even the butt of their own jokes.

Viewers watching “The Unicorn in Captivity,” the seventh episode in Season 7 of “The Venture Bros.,” you likely heard a familiar voice in one of the new supervillain characters introduced: Presto Chango, a shapeshifting clown who can stretch his body into all kinds of shapes. Of course, if you’ve got an evil cartoon clown in your comedy about superheroes and villains, there’s really only one choice for casting.

And yup, Presto Chango is voiced by Mark Hamill, he of “Star Wars” fame and who has voiced Batman’s arch-nemesis, the Joker, in cartoons, animated movies and video games for nearly three decades.

Hamill’s Presto Chango is something of an homage to his Joker, with his high-pitched laughs and squeaky tenor. It wasn’t the only role the actor played during the episode. He also voiced the spooky leader of the Illuminati in another segment, in which the elite rulers of the world offered Doc “Rusty” Venture (James Urbaniak) a chance to join them in exchange for not publicizing the teleporter technology he’d created.

Back in Season 4, “The Venture Bros.” slipped in another Batman reference that worked on a meta level. Kevin Conroy — the voice of “Batman” in “Batman: The Animated Series” and numerous video games and animated movies — popped up in a role that was, basically, a spoof on his iconic character.

That role was Captain Sunshine, whose story got fleshed out in the episode “Handsome Ransom.” Sunshine is a bit of an amalgamation of references to both Superman and Batman. The show jokes that Captain Sunshine was, at the least, overly attached to his ward, Wonder Boy, and their relationship gets some creepy implications.

The episode is full of Batman jokes, too. Wonder Boy is a riff on Robin, Batman’s sidekick who is often called the Boy Wonder, and Captain Sunshine laments how his previous Wonder Boy cohort was killed by the Clue Clown, before he tries to get Hank Venture (Christopher McCulloch) to take over the role. In DC’s “Batman” comics and in the animated movie “Under the Red Hood,” Jason Todd took on the role of Robin after Dick Grayson, Batman’s original sidekick, before he was believed killed by the Joker.

It’s implied at the end of the episode that Rusty’s Illuminati experience, which is a creepy “Eyes Wide Shut” sex party where Rusty accidentally eats hors d’oeuvres made from orphans, is actually just a ruse put on by his handlers at the Office of Secret Intelligence. That probably means this is the last we’ll see of either of Hamill’s characters from this episode, since one apparently doesn’t exist and the other got stabbed in the head by Brock Samson (Patrick Warburton).

But other characters have come back after seemingly being killed off — so hopefully “The Venture Bros.” will give fans a chance to reunite Hamill and Conroy (or at least, their voices) on the small screen. The only thing better than sending up their famous “Batman” characters separately is the two actors doing it together.