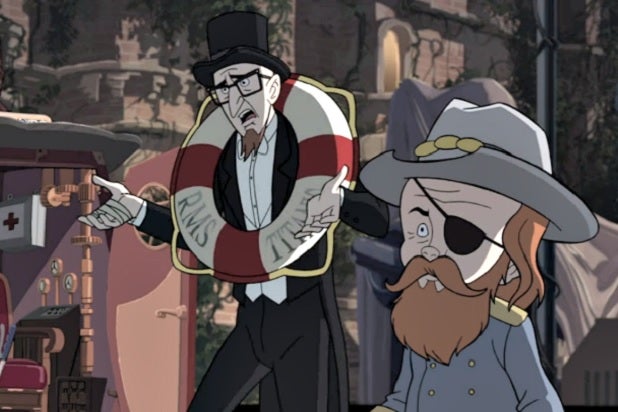 Season 7 of “The Venture Bros.” has already had a ton of callbacks to past seasons, turning what felt like throw-away gags into suddenly-relevant lore or character details. But in the season’s penultimate episode, “The Forecast Manufacturer,” a callback teases a huge possibility for the entire series — that the universe in which it takes place has been the wrong one all along.

In “The Forecast Manufacturer” the eastern seaboard has been hit by a devastating blizzard caused by a weather control machine being operated by rogue supervillain The Creep (James Adomian). Creep used to be a member of the Guild of Calamitous Intent, but defected to its rival Canadian organization, the Peril Partnership, and thus The Mighty Monarch (Christopher McCulloch) and Henchman 21 (Doc Hammer) are dispatched by the Guild to infiltrate the Creep’s base and kill him.

Also Read: 'Venture Bros': 'Unicorn in Captivity' Hints at Where Season 7 Is Headed

When they arrive, they learn that the weather machine is actually just one of several devices Creep has stolen from the Guild on his way out. Among them, Grover Cleveland’s Presidential Time Machine, a Victorian-era wardrobe with a bust of the 22nd/24th President on top. That, yes, is also a time machine.

If that reference went over your head, it’s OK. Grover Cleveland’s Presidential Time Machine was last seen all the way back in Season 1’s “Are You There God? It’s Me, Dean,” where it was mainly just a funny joke (why Cleveland, of all presidents?). It was just something Monarch essentially stole from Rusty Venture (James Urbaniak) and, we now know, handed over to the Guild, and was never mentioned again.

But just minutes after its reappearance in Season 7, it comes into play, and shakes up the entire “Venture Bros.” continuity in the process.

While the Monarch and 21 are fighting Creep (by playing “Dive Bomb” with illegal lawn darts), the time machine suddenly turns on of its own accord and out step two familiar figures: Rusty and Billy Quizboy (Hammer). Rusty is dressed like a passenger on the Titanic (complete with a life preserver from the doomed ship), while Billy sports a Union army uniform (and beard) from the American Civil War. From their dialogue, we can piece together a few things about them, starting with the fact that they’re not “our” Rusty and Billy.

See, throughout “The Forecast Manufacturer,” Rusty and Billy were on their own mission to stop the blizzard. But their story only tangentially involves the Creep and never intersects with the Monarch and Henchman 21. Which means — you guessed it — the Rusty and Billy who emerged from Grover Cleveland’s Presidential Time Machine are time travelers.

Though they’re only onscreen for a few moments, Time Traveler Rusty and Billy reveal a few very significant things about their situation before they go.

First: They’ve been using the time machine regularly to go to different eras — which is a likely explanation for the costumes.

Second: They think they’re in the prehistoric era when they arrive, and immediately determine that the Creep is a caveman.

And third: they’re apparently trying to “fix” situations or screw-ups they’ve made along the way. After Creep is accidentally killed by his own lawn dart, Billy shrieks that they’ve killed the caveman and says to Rusty, “Alright, back in the time machine. Let’s go back farther and fix this too.”

But there’s also another giveaway with huge implications: Time traveling Rusty’s reaction to the Monarch. “Malcolm?” Rusty asks in surprise. “What are you doing in 70 million years ago?”

We’ve only heard the Monarch referred to by his real name, Malcolm, a couple of times in the entire run of the show, and it certainly takes him by surprise here. “Did that douche just call me Malcolm?” he asks after Time Traveling Rusty and Billy disappear.

But as far as we know, the non-time traveling Rusty doesn’t actually know the Monarch’s real name. What’s weird though, is flashbacks over the last several seasons have revealed that the two arch enemies knew each other and even played together as children, something neither of them seem to remember at all. But Time Traveler Rusty is different. He seems to be at the very least on friendly terms with “Malcolm.”

Why? One possibility is that Time Traveler Rusty is from the future, after he and The Monarch have set aside their differences and, perhaps, become friends. But the line about going back “even farther” seems to be a clue that something much huger is in play: Time Traveling Rusty is from a completely different version of history, one in which Rusty and the Monarch haven’t been arch enemies since college.

It’s obvious at least that they’ve been time traveling and, apparently, messing things up pretty badly. Billy’s line to Rusty when they step out of the time machine is, “Get your finger. Don’t touch anything else.” This suggests that when Rusty and Billy last visited the prehistoric era, Rusty lost a finger — not exactly a smooth time travel mission. (Not to mention their reaction to Creep’s death.)

In fact, everything we’ve seen in “The Venture Bros.” throughout all seven seasons may well be the unintended, “A Sound of Thunder”-like consequences of their time stream misadventures.

In “A Sound of Thunder,” Ray Bradbury’s classic sci-fi story, a time traveler accidentally changes history when he steps on a butterfly during a trip to the Mesozoic era. That butterfly’s death alters the timeline in both subtle and extremely drastic ways (including basic language syntax and kind of government) as the effects of the change ripple out through history. By the same token, Time Traveling Rusty and Billy appear to have been making some big changes of their own – and The Mighty Monarch, after all, named himself after the species of, you guessed it, butterfly.

What those changes have been or might be is still really speculative. What’s worse is that judging from Rusty’s addressing of The Monarch by his real name, he and Time Traveler Billy may also be completely unaware of the larger effects they’ve had on the timeline. They at least don’t even seem to know exactly when they are.

But either way, we think it’s clear that Time Traveling Rusty and Billy are in fact the original Rusty and Billy, and the versions we’ve seen since the very first episode are time travel-created duplicates.

That would explain a lot of still-unresolved plot threads, like how Rusty and Malcolm were childhood pals but somehow don’t remember. It might even be what created the Monarch to start with. And if there’s something in the story that the time travel plot point could readily serve, it’s the ongoing relationship between Rusty and the Monarch. We’ve seen that relationship grow, evolve, decay, regress, and grow again over the last seven seasons. What we don’t know about it is why it exists at all. Maybe Grover Cleveland’s Presidential Time Machine will finally give fans the answers they’ve been wondering about, and give a sense of where Rusty and the Monarch are headed as they progress into the future.

Even the episode’s title, “The Forecast Manufacturer,” seems like an allusion to time travel, rather than the more obvious joke about the weather machine at the center of the story. If Time Traveler Rusty is trying to “manufacture” the “forecast” of events, and failing, that could have serious implications for the show going forward.

At minimum, we have to ask just how much of Rusty’s personal and professional failings, not to mention his deep-rooted character flaws, stem from his having screwed things up for himself via time travel hijinks. After all, we’ve already seen an alternate universe version of Rusty who was competent, creative, and wildly successful (and who the Rusty we know once tried to kill and replace). What if this universe’s Rusty isn’t just a trans-dimensionally anomalous screwup, but an actual screwup?

But does this mean “The Venture Bros.” is headed for a literal reboot?

Maybe, maybe not. One thing that’s certain, if Season 7 has shown us anything it’s that “The Venture Bros.” isn’t beholden to  any of its lore. The season started with a three-episode arc about the Monarch’s father, the Blue Morpho (Paul F. Thompkins), and Rusty’s father, Dr. Jonas Venture (Paul Boocock), that upended a ton of the show’s core backstory. Both were show to be still alive — and then promptly killed so the show could get back to more current stories with its main characters.

So while the presence of time travelers from alternate timelines messing up events seems like a big deal, it’s important to remember that show creators Jackson Publick (AKA Christopher McCulloch) and Doc Hammer are willing to set up major points like this, complete them, and throw them out the window  just for a good punch line. Stay tuned, in other words. And don’t step on any butterflies.