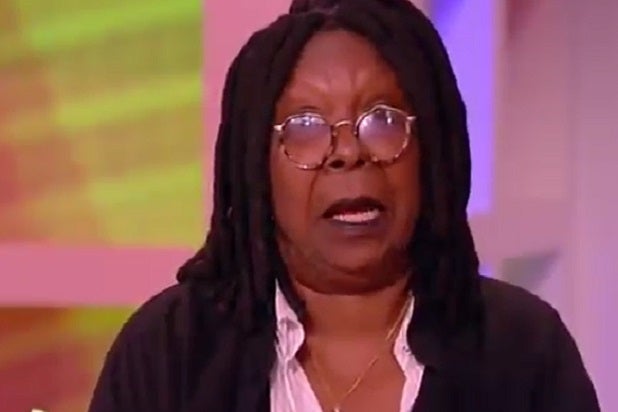 Watch out, Donald Trump: the ladies of “The View” have your number.

Mogul/GOP presidential candidate Trump came under fire from Whoopi Goldberg and her cohorts during Thursday’s episode of the ABC talk show, after appearing to reveal the cell-phone number of fellow candidate and South Carolina senator Lindsey Graham earlier this week.

After playing a video of Trump claiming that he revealed the number as retaliation for Graham calling him a “jackass,” “View” cohost Rosie Perez called the Donald out for his perceived hypocrisy.

“That’s a lot of nerve for him to get upset because someone called him a jackass, but he called Mexicans rapists and killers,” Perez noted, referring to inflammatory statements that Trump has made about immigrants. “I guess you can dish it out, but you can’t take it.”

Michelle Collins brought some comic relief to the discussion, reflecting on another topic of raging debate: Trump’s curiously-styled coiffure.

“His hair is full of secrets; I’ll be honest,” Collins chimed in. “Every secret, the hair [grows bigger]; it’s now, it’s like gone full nanny. It’s huge. What is happening there? I love it.”

Further on, the panel reflected on the case of Sandra Bland, a woman who was found dead in her Texas jail cell three days after being arrested during a routine traffic stop.

Co-host Nicolle Wallace zeroed in on the controversial dashcam footage of the police car, which failed to capture the majority of the exchange between Bland and the officer who pulled her over.

“It’s inexplicable to me” that the exchange went on outside of the range of the camera, said Wallace, who also questioned a supposed “glitch” in the footage.

“The audio has no glitch, but the video has a glitch,” Wallace pondered.

“There’s no good outcome here; there’s just no good outcome,” Goldberg reflected, suggesting that the best course of action would be to get to the bottom of the situation and teach police and the public alike not to “freak out” when they encounter each other.

During Thursday’s episode, “The View” also welcomed the brother and sister-in-law of Kate Steinle, who was killed in San Francisco, allegedly by an illegal alien who had previously been deported five times.

See video: 'The View' Addresses Slut-Shaming on 'The Bachelorette': 'When Did Twitter Become the Sex Cops?'

Steinle’s brother Brad, whose family is pushing for legislation that would tighten immigration enforcement, insisted that his problem isn’t with immigrants in general, but with those who don’t abide by the law.

“If you come to America and your goal is to provide a better life for your family, you should be welcomed,” Steinle said.

He also took aim at San Francisco’s sanctuary city policy, which allowed his sister’s alleged killer to remain in the country. While the policy began with noble intentions, Steinle said, “It’s gotten way out of control, and essentially the city of San Francisco is rolling out the red carpet for criminals to come and stay in the city.”

Added Steinle, “It’s simple; we need to keep the criminals off the street.”