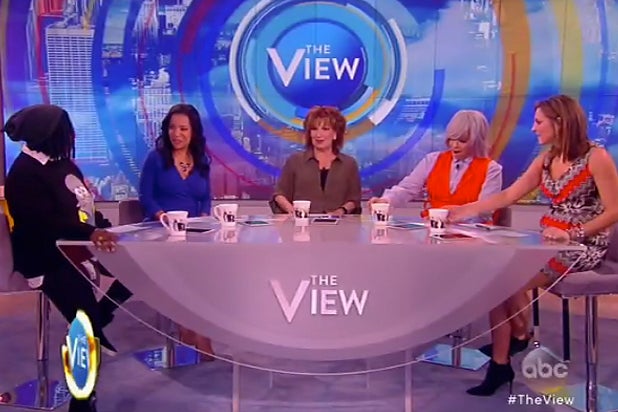 “The View” returned with its first new episode of 2016, and wasted no time diving into one of its favorite topics: Donald Trump.

The Republican presidential candidate came out with his very first TV spot on Monday morning, reiterating his pledge to temporarily ban all Muslim travel to the U.S., and the panelists were not surprised he doubled down.

“What concerns me most about the ad is it’s sort of fear mongering,” said guest co-host Sunny Hostin.

The panelists also called out Trump for branding Hillary Clinton a liar after she suggested ISIS has used clips of his rhetoric in its recruitment videos.

“There was no [specific] video at the time, but it was all over Twitter,” Joy Behar defended the Democratic presidential candidate, adding that now there was at least one actual recruitment video, from Al-Qaeda affiliate Al-Shabaab.

“What?!” exclaimed Whoopi Goldberg, who had not heard Trump’s remarks following the video, prompting Raven-Symoné to reply, “Exactly.”

Goldberg would like Trump to be more inclusive in his targeting of terrorists if he wants to continue to use the same rhetoric.

“Quite frankly, if you want to fear monger, go ahead, but when you see a terrorist, call them that,” she said. “You want to use ‘Islamic extremist terrorist?’ Fine, but there are a lot of racists in the world and we have to name them [terrorists] as well. This is still America. This is where people come for a better life. That’s what those tablets are that she’s holding.”