Former White House press secretary Stephanie Grisham admitted on Tuesday that her 14-year-old son expressed his disappointment about where she used to work — and she doesn’t blame him.

During Tuesday morning’s episode of “The View,” the panel of women began discussing Florida’s “Don’t Say Gay” bill, which has passed through the Florida Senate and is headed to Governor Ron DeSantis’s desk (who is expected to sign it into law). As the women dug in on all that it entails, host Sunny Hostin blamed its creation on the former president, dinging Grisham for working for Trump in the first place.

“We have been on this path, I’m sorry, since your boss… your former boss took office,” Hostin said. “He started saying the quiet part out loud, the discrimination became transparent and blatant. And this is the result of it.” 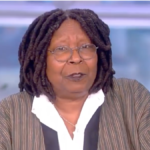 Grisham noted that this particular bill hits close to home for her, and conceded that Hostin’s mention of Trump was “a great point.”

“I have a 14-year-old son who is gay, recently came out as gay — which, I have his permission to talk about, by the way — and he didn’t want to tell his friends where I worked,” Grisham said. “You know, he was like, he was ashamed of where I worked, rightfully so.”

Grisham also criticized the language surrounding the bill, and said that it comes in response to a non-existent problem.

“The fact that now there’s this ‘Don’t Say Gay,’ even slogan out there. It’s making children feel different,” Grisham said. “And there’s a problem, or, it’s creating a problem I don’t think there is.”