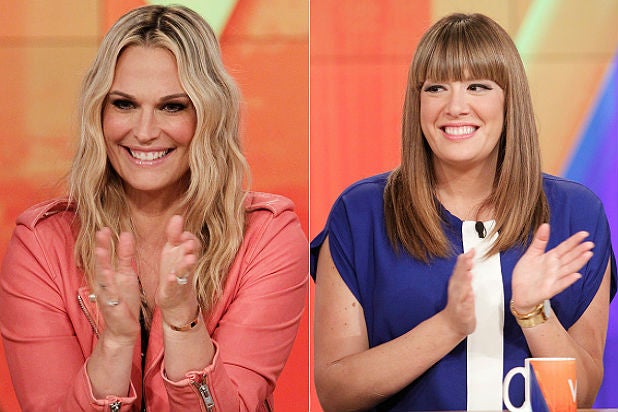 ABC’s “The View” is considering making change a permanent part of its host lineup.

Actress Molly Sims is being considered as a regular guest co-host on the show, individuals close to the show told  TheWrap.

Under “The View’s” new plan, the show would feature a core group of rotating co-hosts — including frequent guest Michelle Collins — who would rotate in and out alongside the four regular panelists. Collins and Sims are presently frontrunner choices with show brass to potentially fill the fifth seat full-time in the future, according to one of the individuals.

The shift in hosting format would follow Raven-Symone’s introduction on June 10 as the show’s newest full-time co-host — the most recent in a spate of lineup changes.

Sims has been a frequent guest co-host in recent months.

Also Read: 'The View's' Whoopi Goldberg Takes on Bill O'Reilly Racism Claim: 'Let's Not Pretend That It's Not There'

Collins drew attention in May, when, while appearing on “The View,” she said of Kanye West’s heavily censored performance at the Billboard Music Awards, “Honestly, finally somebody shut Kanye up.”

Guest co-hosts have been a familiar sight on “The View” since Rosie O’Donnell exited the show in February — just five months after returning as part of a new slate four hosts team that also included Rosie Perez, Nicole Wallace, and returning moderator Whoopi Goldberg.

That lineup was introduced following the departures of co-creator Barbara Walters and two of her fellow co-hosts, Sherri Shepherd and Jenny McCarthy.