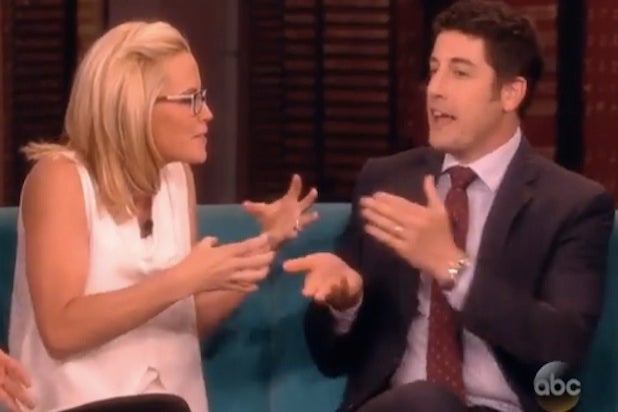 Jason Biggs had his feet held to the fire by the hosts of “The View” over his wife Jenny Mollen’s revelation in her book “I Like You Just the Way I Am” that she hired a hooker for his birthday.

Biggs responded to Bure’s complaints, saying, “I love her,” before quipping, “I think Candace was asking for more details. I think she just wanted us to demonstrate for her.”

“Your wife in her book said that for your birthday she hired a hooker for you,” Sherri Shepherd said.

“Yes, it was a comedy of errors. It was, for us, hilarious,” Biggs said. “We’re very open people. we’re real people, honest. My wife is amazing. This is not a habitual thing on our part. We don’t have, you know, a group of prostitutes that are coming in and out of our house with any regularity.”

“Let me go back to yesterday’s clip, Jenny, you understood very much that my wife was reluctant because of the circumstances — the story, the way she writes and the way things went down was on the graphic side. Now, Candace said that she didn’t find the humor in that. Didn’t think it was hilarious, she was married for 18 years. She doesn’t feel the need for that. Didn’t absolutely, for her, that’s fine. but, I can guarantee her husband is probably thinking about it. But whatever.”

Shepherd continued to press Biggs on the details of the prostitute encounter.

“My wife, first of all, took three ladies over the course of different days, three different ladies — my God, it’s really impossible to really say anything on daytime television, isn’t it?” he said. “Well, let’s just say that I didn’t complete the mission and my wife found the whole thing to be quite hysterical even while it was happening. She was actually on the bed watching, eating a bag of chips, laughing! So as you can imagine I wasn’t really performing to the best of my abilities. But also, said prostitute wasn’t really engaging with my wife the way I was hoping she would. So it all fell apart and the rest is in the book!”