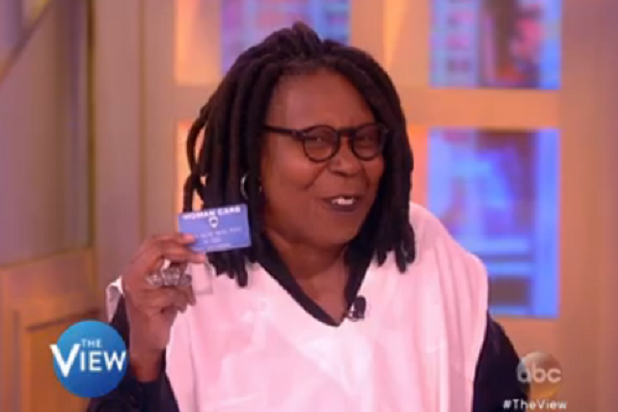 Excuse Whoopi Goldberg while she whips this out.

“The View” maven Goldberg played the woman card in the most literal way during Thursday’s episode of the daytime talk show. After discussing presidential candidate Donald Trump’s accusation that his political rival, Hilary Clinton, benefits from “the woman’s card.”

Borrowing from — OK, outright lifting from,with citation — Washington Post writer Alexandra Petri’s article on the same topic on Wednesday, Goldberg held up her own woman card and rattled off its “benefits.”

Also Read: Whoopi Goldberg to Donald Trump: 'I Ain't Going Nowhere, This Is My Country' (Video)

“The woman card entitles you to a sizable discount on your salary everywhere you work,” Goldberg recited. “Hook it up to the TV and get a barrage of commercials telling you what’s wrong with your face and your body.”

Goldberg continued, “It’s not a form of birth control, but it can prevent you from getting coverage for yours. And, unlike the man card, women’s cards do not increase in value as they age.”

Paula Faris likened the move to  “the team that’s down 40 points in the fourth quarter and is planning where they’re going to go for their victory.”

“It’s a Hail Mary, but I think it’s worth a shot,” Candace Cameron Bure opined.

Joy Behar offered her own take on the pairing of Cruz and Fiorina.

“They have a lot in common; no one likes either one of them,” Behar offered.