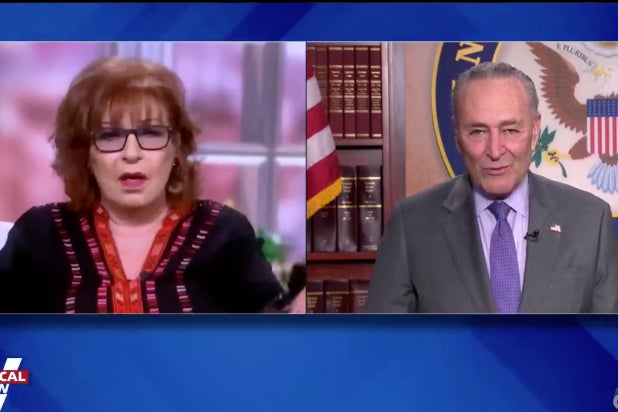 On Thursday’s episode of “The View,” co-host Joy Behar spoke to Senate Majority Leader Chuck Schumer about the recently passed $1.9 trillion COVID-19 relief package, asking him what he has to say to “people on the right who think this is not enough relief and too much pork.”

“I say to my Republican colleagues, you didn’t join us in this one even though this is just what America wants, even though 75% of America is for this bill. By the way, close to a majority of Republican voters are for this bill,” Schumer replied, noting how the bill could help Americans return to a normal life sooner rather than later.

After co-host Sara Haines remarked that not one Republican senator voted for the bill, she asked if there was any real chance for bipartisanship in the future — a topic that has previously been discussed on “The View.”

Also Read: 'The View' Co-Hosts 'Disappointed' by Queen's Response to Meghan-Harry Interview: 'That Tiara Is a Little Tight'

“We’ve tried to be bipartisan,” Schumer said, referencing an amendment he’d put forth that assisted restaurants by issuing grants that would sustain them financially through September. That bill, he mentioned, was sponsored by Arizona Democrat Kirsten Sinema and Mississippi Republican senator Richard Wicker.

“Even though no Republican voted for the bill, they did have some input,” Schumer said. “I’m just hoping, praying, beseeching — our Republican friends, join us in the next bill. We need to build infrastructure, we need more job training, we need to deal with the climate issue. Please join us. It will be easier, better and stronger if we do.”

And Schumer couldn’t help throwing in a little pointed threat about how Democrats aren’t ready to screw around when it comes to navigating the pandemic.

“If they don’t join us, we’ll have to go forward on our own like we did this time,” he said. “But maybe they will.”

Senate Majority Leader @SenSchumer tells @TheView the $1.9 trillion COVID-19 relief package passed by Congress is “geared to what America needs”: “To my Republican colleagues, you didn’t join us in this one even though it’s just what America wants.” https://t.co/cVclFZQmjA pic.twitter.com/g2AZ2doMpt