The hosts of “The View” have absolutely no time for the racist criticisms of new fantasy shows like HBO’s “House of the Dragon” and Amazon’s “Lord of the Rings: The Rings of Power.” So, on Tuesday’s season premiere of “The View,” the ladies went off on those critics, mocking their outrage.

For those disgruntled fans, the primary argument against the diverse casting of “The Rings of Power” is that J.R.R. Tolkien never intended to populate Middle-earth with people/creatures of color, despite Tolkien explicitly describing the Harfoots as having “browner” skin in contrast to their descendants the hobbits. In fact, in tandem with the premiere of “The Rings of Power” on Amazon, the streamer suspended user reviews for the first 72 hours to prevent those angry about the racially diverse cast from “review bombing” the series. 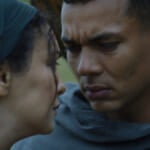 Also Read:
The Racist Backlash to Amazon’s ‘Lord of the Rings,’ Explained

The rest of “The View” hosts largely agreed, with newcomer Alyssa Farah Griffin mocking those that actually take the time to write those negative reviews, solely based on being upset at diverse casting. Meanwhile, host Sunny Hostin opted to argue the silliness of the argument by noting the other physical traits of the characters, specifically referring to HBO’s “Game of Thrones” prequel.

“What I think is fascinating is like, dragons are OK, fire-breathing dragons, and people with white hair that are born like that when they’re little, and violet eyes, but the Black people in it is just a bridge too far for these folks,” Hostin mocked.

Eventually, the discussion came back around to Whoopi Goldberg, who had a prediction about Disney’s upcoming live-action version of “The Little Mermaid” — and some more mockery for the crowd who will be upset by it.

Before the segment ended, Whoopi got even more blunt.

“All of y’all who have problems because there are Black hobbits? Get a job!” she said. “Get a job! Go find yourself, because you are focused on the wrong stuff.” 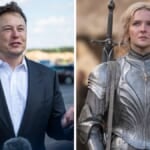 Also Read:
Elon Musk Says ‘Tolkien Is Turning in His Grave’ Over Depiction of Male Characters in ‘Rings of Power’
x