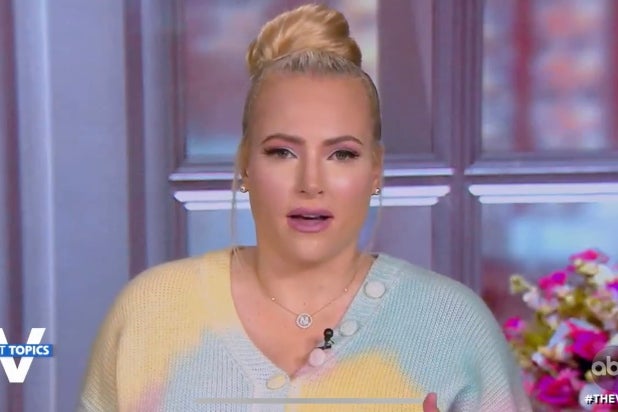 Meghan McCain had a bone to pick with Democrats on Monday’s episode of “The View,” saying that anyone who agrees with Katie Couric’s recent comments about Trump supporters can “go to hell.”

As former President Trump faces possible conviction on an article of impeachment for inciting an insurrection at the U.S. Capitol, he is also threatening to take his supporters away from the GOP and start a new “Patriot” party. But instead of digging into what threat that prospect poses for President Joe Biden’s hopes for unifying the country, McCain decided to point the finger at the former “Today” host Katie Couric, who recently wondered aloud to Bill Maher about how to “deprogram” people who have bought into the “cult of Trump.”

McCain started fuming on Monday’s episode over what she views as hypocrisy amid Biden’s call for unity.

Also Read: 'The View' Host Meghan McCain Takes Shot at Fauci on Early Mask Guidance: 'I Was Lied To' (Video)

“In regards to Democrats, what’s interesting to me is just, I had sort of assumed after President Biden won that the feeling of unity and of coming together would be happening, the Democrats would be wanting Republicans to come together with them to go forward. And instead, we’re hearing a lot of language from people like Katie Couric that Republicans like me need to be reprogrammed, that we’re brainwashed, that 74 million Americans are basically irredeemable people that we don’t need to communicate towards and we don’t need to in any way have anything to do with,” McCain said. “I think it’s horribly dangerous for the country, and I think it’s horribly dangerous for Democrats. If you don’t care about unity, you should care about the politics of this.”

It’s interesting that McCain took Couric’s comments so personally, considering the potential “Jeopardy!” guest host was specifically referring to Trump supporters, not the entire Republican party. McCain herself is vocally anti-Trump and has criticized her own party for embracing him on several occasions.

Nevertheless, McCain continued: “If President Biden and Democrats want to have a big tent party and include some of these people, great. And if we’re all just deplorable and need to be reprogrammed, as Katie Couric said, then honestly, they can go to hell. Because I don’t need to be reprogrammed. I just have a different perspective on how the government should be run.”

That’s when Whoopi Goldberg chimed in with an “OK, cool,” to try to de-escalate McCain’s rant.

DOES SENATE TRIAL SERVE COUNTRY’S BEST INTERESTS? With the article of impeachment set to be delivered to the Senate on Monday, Republicans are split on how to move forward – the co-hosts weigh in. https://t.co/UqON94CijA pic.twitter.com/S6SIEvYVss