Arkansas Governor Asa Hutchinson admitted this week that he regrets signing the bill banning state and local mask mandates, and the hosts of “The View” are impressed at his honesty. But Meghan McCain still thinks Florida Gov. Ron DeSantis is benefitting from not walking back his decision to do likewise, and the words of critics condemning him for it.

“He’s such a target for the left right now. Everybody should keep attacking him because it’s just making him more powerful and more likely to be the nominee for president,” McCain said Thursday on “The View” of DeSantis. “He knows what he’s doing. A lot of the reason why he has popularity has to do with the way he’s handled mask mandates and freedoms and opening up the beaches in Florida.”

McCain added that she does not hope that cases continue to increase, or that the increasing variants prove to be even more problematic than the original COVID virus. She also reiterated that she encourages people to get fully vaccinated, and that she herself has been fully vaccinated for months now. 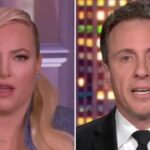 “The View” panel of women collectively praised Hutchinson for admitting he was wrong, after seeing the near inevitable spike in cases as a result of the measure.

“In hindsight, I wish that it had not become law,” Hutchinson said in a news conference on Tuesday. “But it is the law, and the only chance we have is either to amend it or for the courts to say that it has an unconstitutional foundation.”

Meghan McCain’s last day on “The View” is set for this Friday, August 6. You can watch the full segment from “The View” in the video above.