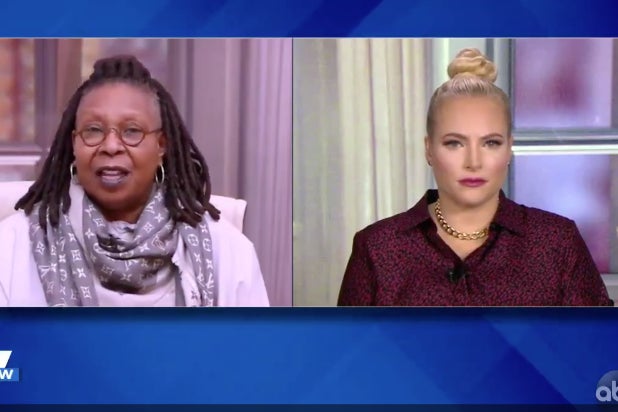 On Wednesday’s episode of “The View,” Meghan McCain doubled down on her criticism regarding the vaccine rollout. Referencing the statistic that 30 percent of people in the country still don’t want to take the vaccine, McCain said she “blamed the messaging that’s been coming out of the CDC for this problem.”

McCain’s comments came after an announcement from President Biden that the U.S. would have enough doses of vaccines to inoculate all Americans by the end of May, as well as a charming viral video of Dolly Parton getting the vaccine she helped fund and a discussion that involved debating if the video would assure the public that getting vaccinated is the right thing to do.

“I just think we need something to hope for,” said the co-host. “It’s great that I can now be vaccinated by the Biden administration in two months, but what will change? If we’re just going to live like this forever with masks and locked down, I think people are going to get anxious about it.”

Whoopi Goldberg said that while she understood McCain’s views, she thinks the “hope” her co-host is referring lies in people becoming more comfortable if they’re vaccinated — and that’s what she hopes the next group of messaging from the CDC will be.

“The hope is that when folks get their vaccines they continue to wear their masks and they don’t start doing stuff before we can do it,” Goldberg said. “Because I think the biggest problem we have in this country is we have to make sure that everyone wears their masks, gets vaccinated, so we can get to a place where everyone is comfortable enough so we can go do stuff.”

DOLLY PARTON GETS VACCINE SHE HELPED FUND: The music legend received her first dose of Moderna’s COVID-19 vaccine that she helped fund with a $1 million donation—the co-hosts discuss if her taking it publicly will assure the public to get vaccinated. https://t.co/IuFqWKm9IF pic.twitter.com/Qq6oy7gA9s