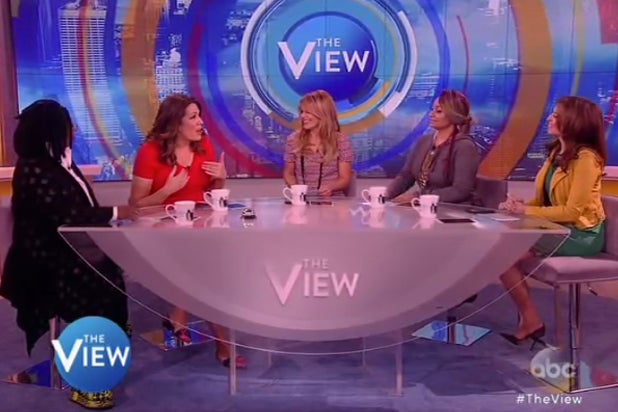 “The View” got off to a contentious start Monday, with Michelle Collins and Candace Cameron-Bure disagreeing multiple times during the talk show’s Hot Topics segment.

After sparring over Ted Cruz, with Collins saying she’d like to see him fall due to his preaching of Christian values and Cameron-Bure vehemently disagreeing, the two were on opposites again when the issue of transgender issues came up.

The panelists ran a Funny or Die video parodying the new law just signed in North Carolina, which requires transgender people to use public restrooms that reflect the gender listed on their birth certificate.

“Why are we instilling this fear in people that’s totally crazy and sad?”  Collins asked.

Most of the panelists agreed with her, with guest co-host Jedediah Bila, saying, “I’m all for religious freedom but I feel like sometimes that argument is used as a means to discriminate… I’m here to say I am on the right and I have a real problem with stuff like this because I don’t want people to be able to discriminate against another person.”

Cameron-Bure, however, raised her own concerns about transgender people and discussed her dislike of the Funny or Die parody.

“As a conservative person I felt like it kind of painted with a broad brush that we all feel that way,” she said. “And you know, as a parent, I have to say, I don’t understand the transgender person and I would like to. but there is a fear that if i go into a public place or — I shouldn’t say fear. I don’t have a fear, but I do want to make sure that my child would be comfortable or if there was a man in there…”

Collins couldn’t take it and simply told her, “You should watch ‘Transparent,’ on Amazon. It would actually teach you a lot.”