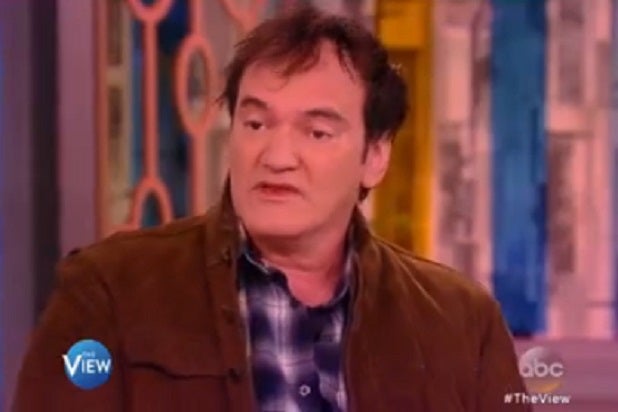 Filmmaker Quentin Tarantino appeared on Wednesday’s episode of “The View” to clarify the controversial comments he made at an anti-police brutality rally in New York last month.

Tarantino asserted to Whoopi Goldberg and the rest of the “View” crew that he doesn’t hate police — but that he’s being smeared as someone who does.

“I’m not anti-police. I’m not a cop-hater. They’re trying to vilify me as that,” Tarantino said. “As far as I’m concerned, Patrick Lynch, the head of the NYPD union, is slandering me by calling me a cop-hater because they can’t deal with the criticism that I’m giving.”

The “Hateful Eight” filmmaker went on to stress that he wasn’t calling all police murderers at the rally, but was instead referring to specific instances of police-related deaths.

Tarantino’s comments sparked particular outrage because they came just days after the killing of a New York City police officer. While he acknowledged that the timing was “unfortunate,” he added that the protest organizers weren’t going to turn away the victims’ families that had gathered to tell their stories.

“The reason for this rally was to have these families tell their stories. Rallies like this take months to set up in advance,” Tarantino said. “Because [the officer’s death] happened, we’re going to tell all those families, ‘Well, we’re not gonna hear your story. You’re not gonna say your piece. You’re not gonna talk about your loved ones. We’re gonna send you home. I’m sorry, the timing is just, it’s not right. It’s not good.’ We were not gonna do that. The people needed to be heard.”

Tarantino also addressed the calls for boycotts of his films that have cropped up as a result of his comments.

“They are kind of demonizing me … they don’t want to handle this kind of criticism, at least coming from somebody I guess where I’m coming from, from my kind of stature,” Tarantino said. “And so the thing is, they have to tear me down in the public, and they’re doing it by slander, not by my own words.”

The reaction to his speech, Tarantino said, is also meant to have a chilling effect on others who might want to speak out.

“They’re trying to tell any other person like me that feels this way to just stay out of it. ‘You see what we’re doing to Quentin? We could just as easily do that to you, so keep your mouth shut,'” Tarantino said.