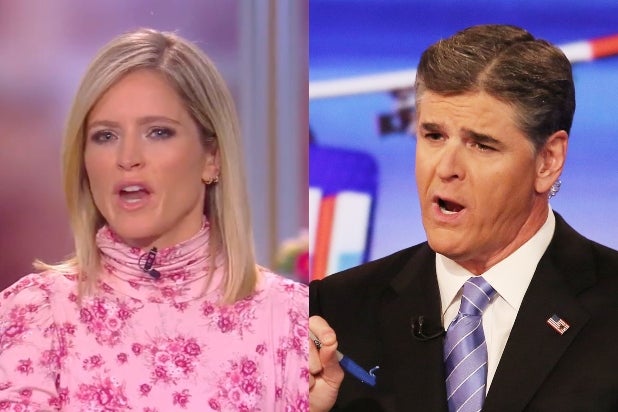 “The View” co-host Sara Haines dragged Fox News host Sean Hannity on Tuesday for suggesting that Donald Trump should pardon himself during his last days in office, saying that the legal welfare of the outgoing president should be “at the bottom of the priorities list.”

“Hearing Sean Hannity talk about it, I was like, wait, if you pardon yourself, you’re just saying ‘I’m guilty,'” Haines said this morning on the daytime political talk show. “Is that like a Get Out of Jail Free card for anything you’re eventually accused of?”

Then Haines pointed the finger at Hannity for spending time discussing Trump’s legal situation instead of focusing on what else is at stake for Americans in the coming months, like, you know, the coronavirus pandemic.

“It’s also really convenient for Sean Hannity to talk about that. We’ve got, like, so many things in front of us right now. We’re in the throes of a pandemic without stimulus relief; we’re talking about vaccines and getting them distributed effectively; we just got some of the country to agree [on] the results of an election that happened last month now; we’re transitioning administrations,” Haines added.

Earlier in the episode, Haines’ fellow “View” co-host, Sunny Hostin, said she thought it was “really sad… that we are actually having to talk about whether or not the president of the United States needs a pardon.”

She added: “It’s something I don’t think I would have ever thought would happen like this in 2020.”

Here is a transcription of Hannity’s comments, which were said on his radio show, “The Sean Hannity Show,” on Nov. 30.

“I watched [Robert Mueller investigation attorney] Andrew Weissmann come out and literally say oh, Biden’s A.G. needs to go after Donald Trump. And I’m like, the president out the door needs to pardon his whole family and himself because they want this witch hunt to go on in perpetuity. They’re so full of rage and insanity against the president. I mean, it’s — can the president — I assume that the power of the pardon is absolute and that he should be able to pardon anybody that he wants to. “

.@Sarahaines on Sean Hannity suggesting Pres. Trump should pardon himself: “We’re in the throws of a pandemic without stimulus relief… why are we talking about the pardon? Let’s put that at the bottom of the priority list.” https://t.co/f8u2wbJuik pic.twitter.com/WovGrrZ4a5