Colin Kaepernick’s new Netflix series has gotten a lot of viewers talking thanks to a visceral comparison of the NFL draft process to the slave trade. While some are arguing it goes too far, “The View” host Sunny Hostin isn’t one of them.

Discussing the series on Wednesday morning’s episode, Hostin lamented that Kaepernick’s comparison seems to be “all anyone is talking about, and that is unfortunate” but added that she thinks it’s a fair comparison to make on some levels.

“When you think about the NFL and the concussion lawsuits, you have like race-based testing to compensate them,” Hostin said. “And you know, the majority of the owners of the NFL are white men. The majority of the players are Black men. So there is — that comparison he makes to slave owners and slaves, is not sort of totally unreasonable and out of bounds.” 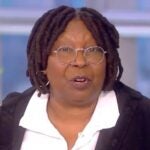 For those who haven’t seen, in the first episode of “Colin in Black & White,” Kaepernick makes the comparison both visually and verbally.

“What they don’t want you to understand is what’s being established is a power dynamic,” Kaepernick says. “Before they put you on the field, teams poke, prod and examine you searching for any defect that might affect your performance. No boundary respect. No dignity left intact.”

The scene then transitions to show football players in a marketplace, shirtless and shackled, being sold as one of the slave owners shakes hands with a football coach. The moment received immediate reaction online, as people argued whether it was apt or too much.

For “The View” guest host Michele Tafoya, an NFL sideline reporter for NBC, it was the latter. 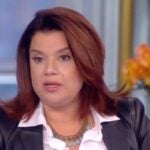 “I thought that the way that it was introduced in the Colin Kaepernick thing was — it is his story, kneeling was part of his story. I give Colin all the credit in the world for taking a stand and I have support for his speech, 1,000 percent,” Tafoya said. “But I thought comparing it to the slave trade was a little rough.”

Tafoya bolstered her argument with the fact that NFL players enter the league willingly, are exceedingly well cared for, and make good money in playing.

Hostin later doubled down on her defense of Kaepernick, adding that “He loves the sport, but the white owners have prevented him from doing it. They’ve colluded, and they have all the power to prevent him from doing the one thing that he loves.”

To that, Tafoya asserted that “If they believed he could win them a Super Bowl, he would be on a team right now. I promise you that.”