The hosts of “The View” were feeling a touch more optimistic about gun control on Thursday, after the House passed some of the most aggressive measures in years. For host Whoopi Goldberg, “it’s like we woke up” after Uvalde.

On Wednesday, the House passed measures that would raise the legal age for buying semiautomatic rifles to 21 and ban high-capacity ammunition magazines. And while the women were still skeptical about if the measure will be signed into law, Whoopi noted that at least people are actually calling their representatives and asking for this.

“We see that people are hearing, because constituents are calling,” she said. “Because people see that it could happen to them in the supermarket. It can happen to their kids, and it doesn’t matter where they are, this can happen at any point. And I think people are saying ‘Enough.'”

She added that the clear catalyst seems to have been the horrific murder of 19 children and two teachers in Uvalde, Texas, two weeks ago, and that she’s glad to see that voters are staying consistent with their pressure. 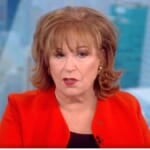 Also Read:
‘The View': Joy Behar Says Gun Laws Will Definitely Change ‘Once Black People Get Guns in This Country’

“I think that’s the magical thing that’s happening here, that people are taking it upon themselves,” she continued. “It’s like we woke up, and said ‘Wait a minute, we’ve been in a fog. And we’ve been letting this stuff go for 20 years!'”

Host Sunny Hostin agreed that she’s pleased to see increased pressure on politicians, but admitted that she thinks this particular piece of gun reform will be “dead on arrival” in the Senate.

But, guest host Ana Navarro noted that she’s been speaking directly to Republican lawmakers — “the serious ones, not the clowns. Not the ones running for president, not the ones who are Twitter trolls” — and that they have told her that, since Uvalde, “this feels different.”

You can watch part of the segment from “The View” below.